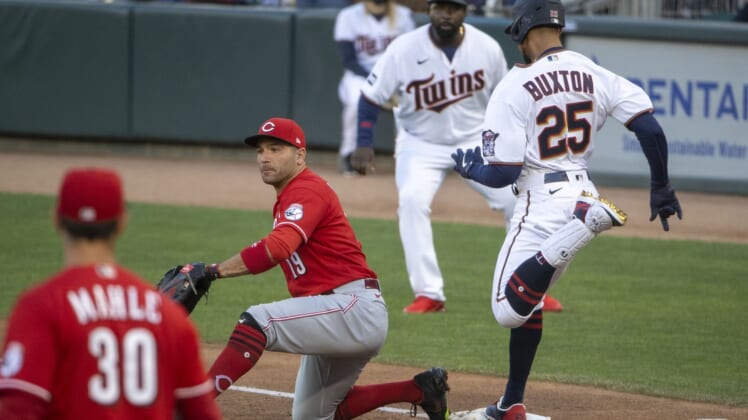 Miguel Sano hit a two-run homer with one out in the bottom of the 12th inning to give the Minnesota Twins a 7-5 victory over the Cincinnati Reds on Monday night in Minneapolis.

Sano socked a 3-1 slider from Heath Hembree (1-3), sending it 402 feet into the bleachers in left-center for his 14th homer of the season. He drove in Andrelton Simmons, who started the inning as the designated runner, and also ended the longest game in the majors this season (five hours, 14 minutes).

Minnesota earned its fifth consecutive victory, the team’s longest winning streak of the season. It also was the fourth straight victory in a game that went extra innings for the Twins, who began the season 0-8 in that category.

Matt Shoemaker (3-8) picked up the victory with two innings of shutout relief.

Reds starter Tyler Mahle allowed three runs on four hits and two walks in the second inning as the Twins jumped out to an early 3-0 lead.

Cruz started the rally with his 16th home run of the season, a 424-foot line drive into the bleachers in left that had an exit velocity of 116.5 mph.

Kepler followed with a walk and advanced to third on a single by Jorge Polanco. Kirilloff then singled to drive in Kepler. Ryan Jeffers walked to load the bases, and one out later, Arraez drove in Polanco with a sacrifice fly to make it 3-0.

Cincinnati came back to tie it in the fourth on back-to-back homers by Suarez, a 430-foot, two-run shot to left-center that drove in Tyler Stephenson, who had walked, and Aquino, a solo blast to left.

Twins center field Byron Buxton, hit on the left hand by a fourth-inning pitch, exited the contest two innings later with what was the team called a left hand contusion.