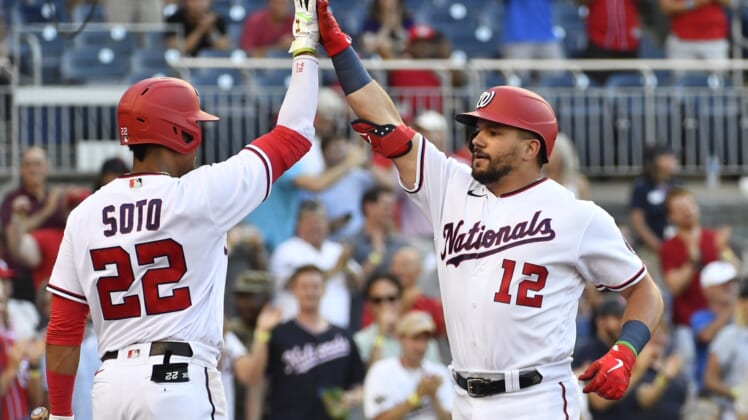 The Nationals won their third consecutive game and are 13-3 going back to June 13. The Rays dropped back-to-back games following a four-game winning streak.

Every position player in the Nationals lineup had one hit starting with Schwarber, who continued his scorching month of June at the plate.

Schwarber crushed the first pitch of the game from Rays starter Rich Hill onto the third deck in right field for his seventh leadoff home run since he moved to the top spot June 8.

Schwarber was coming off Monday’s game against the New York Mets when he hit two home and has five multi-homer games since his long-ball barrage began.

The Nationals were not done in the first as Trea Turner doubled and Soto followed with a two-run blast to give Washington a 3-0 lead. Robles hit his first home run of the season when he smacked Hill’s first pitch of the second inning into the Rays’ bullpen.

Hill (6-3) was able to halt the onslaught and last six innings, giving up eight hits with one walk and two strikeouts.

The Rays inched back into the game, getting Brandon Lowe’s 16th home run of the season in the fifth inning to make the score 4-1, with Kevin Kiermaier adding an RBI double in the sixth.

The Rays closed to within a run in the top of the ninth when Mike Zunino hit his 17th home run of the season off Brad Hand. But the Nationals’ closer retired the next three batters to record his 18th save.

Nationals starter Joe Ross (5-7) gave up two runs on six hits and two walks while striking out seven over 6 1/3 innings.