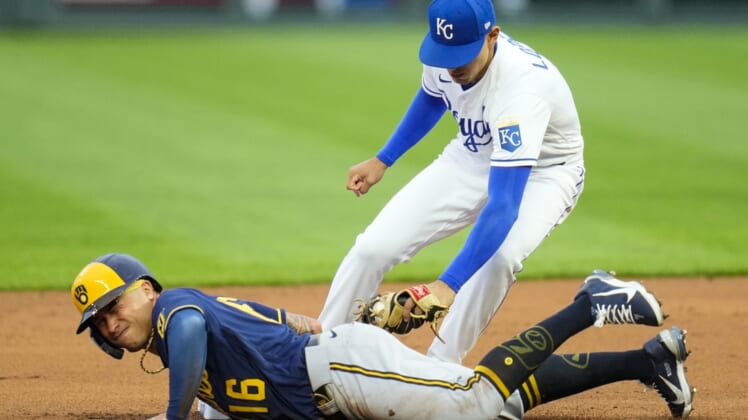 Jorge Soler led off the bottom of the seventh with the long home run to left-center field to tie the game at 3-3, and Nicky Lopez drove in the go-ahead run later in the inning with a bunt base hit just beyond the dirt around home plate.

Scott Barlow (2-1) picked up the win with two-thirds innings of relief. J.P. Feyereisen (0-2), who pitched the seventh for Milwaukee, took the loss. Josh Staumont earned his fifth save.

The Brewers, who didn’t get a runner to second base in Tuesday’s 2-0 loss, got there on three pitches Wednesday thanks to Kolten Wong’s leadoff double. He scored on a two-out single by Omar Narvaez.

The Royals answered in the second as Michael A. Taylor hit a 437-foot home run to left center, a two-run shot.

Jackie Bradley tied it in the fourth with a 413-foot home run to right. Bradley was mired in a 2-for-43 slump before launching an 0-1 pitch beyond the bullpen in right.

The Brewers took the lead in the sixth on a long sacrifice fly by Bradley, which would have been a home run had Taylor not made the catch in center. The drive scored Avasail Garcia, who began the inning with a bloop double over Carlos Santana at first.

Soler tied the game in the seventh on a home run to the second level of the fountains in left field at Kauffman Stadium. Feyereisen then gave up a hit, a walk and a sacrifice, setting up Lopez.

The Royals scored two more in the eighth on a Hanser Alberto single and a wild pitch.

The Brewers added an unearned run in the ninth on Wong’s RBI double.