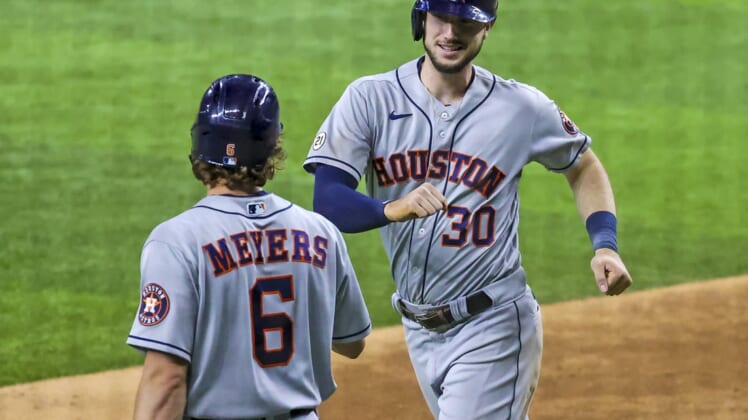 Urquidy (7-3) allowed one run on two hits and one walk with six strikeouts over six innings in his third start since returning from a two-month stint on the injured list. He threw a total of 141 pitches while covering 7 1/3 innings over his two last starts but needed just 81 pitches to handcuff Texas in his longest stint since he worked seven innings against Baltimore Orioles on June 23.

Armed with a three-run lead when he retook the mound in the second, Urquidy retired the side in order in the second, fourth and fifth innings. He surrendered a leadoff triple to Brock Holt and a run-scoring groundout to Yonny Hernandez in the third, but Hernandez was the first of 11 consecutive batters Urquidy retired until Willie Calhoun singled with two outs in the sixth inning.

Meyers and Gonzalez staked Urquidy that 3-0 lead by smacking back-to-back home runs off Rangers rookie right-hander Kohei Arihara (2-4) in the second inning, the eighth time this season the Astros have struck back-to-back home runs. Meyers’ fifth home run snapped an 0-for-12 skid and drove in Kyle Tucker before Gonzalez followed with his fourth homer, and second with the Astros, by driving a 2-2 fastball from Arihara 404 feet into the right-field seats.

Chas McCormick, batting behind Gonzalez and eighth in the order, delivered a two-run single in the fourth inning that stretched the Houston lead to 5-1. The first three batters reached safely against Arihara in the top of the fifth, with Jose Altuve (single) and Aledmys Diaz (hit by pitch) setting the table for Yordan Alvarez, whose double to right plated Altuve and chased Arihara.

Tucker clubbed his 26th homer, off Texas reliever Dane Dunning, leading off the eighth. Tucker finished 3-for-4 and scored three runs as Houston improved to 13-5 against Texas this season.