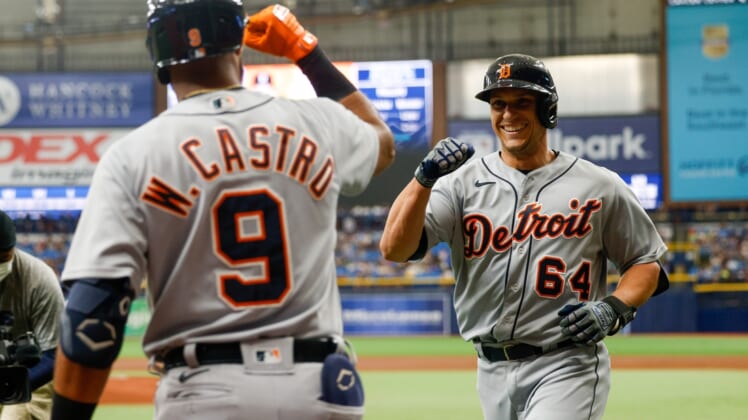 Jeimer Candelario blasted a three-run homer in the first inning and the visiting Detroit Tigers held off the Tampa Bay Rays 4-3 on Saturday.

Dustin Garneau also homered for Detroit (71-78), which dropped the first two games of the four-game series.

Jose Urena (4-8) gave up one run in 3 1/3 innings of relief while striking out four to pick up the win. Michael Fulmer worked the ninth to collect his 10th save.

Detroit starter Tarik Skubal, who is on an innings limit, gave up two runs on three hits in three innings while recording two strikeouts.

Akil Baddoo and Jonathan Schoop led off the game with singles. Yarbrough retired the next two batters but Candelario then clubbed his 16th homer over the center field wall.

Garneau led off the next inning with his fifth homer to make it 4-0.

Tampa Bay cut Detroit’s lead in half in the bottom of the inning, as Margot singled before Luplow clobbered his 11th homer over the left-field fence.

The Rays cut it to 4-3 in the fourth. Margot led off with a walk against Urena and moved to third on a Luplow single. Margot scored when Choi tapped into a double play.

Margot hit a two-out double in the sixth but Urena induced an Austin Meadows grounder to keep his team in front. The Rays left two runners stranded in the seventh. They did the same in the eighth after Kyle Funkhouser gave up a pair of two-out singles.

Tampa Bay also had two runners on with no one out in the ninth. Fulmer responded by striking out Brett Phillips, then inducing a game-ending double play grounder from Yandy Diaz.