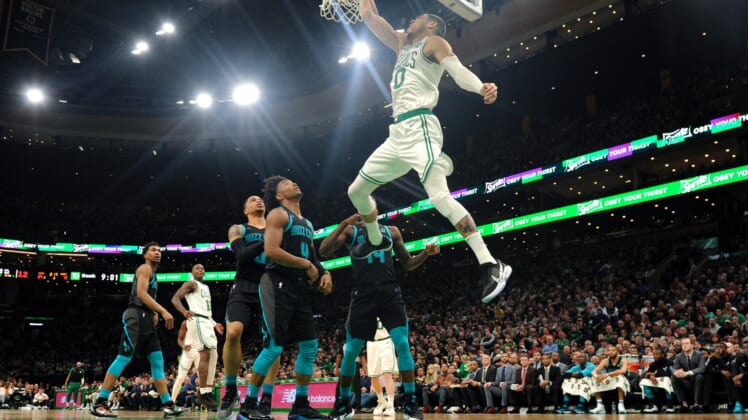 Jayson Tatum and the Boston Celtics were having their way with a solid Charlotte Hornets team at home on Wednesday evening.

Dealing with the backdrop of trade rumors surrounding a couple of their young stars, the Celtics took their frustration out on Charlotte in a big way. They opened up a 23-point lead after three quarters.

Youngster Jayson Tatum played a huge role in this — dropping 20 points on 9-of-15 shooting. Though, it was these two points that had fans inside TD Garden buzzing.

Tatum took this lob from Terry Rozier and treated the rim like his own personal archenemy. It really was something to behold.

Jayson Tatum not letting the trade rumors impact his game. Dude just threw down a massive jam on an OOP from Rozier. #CUsRise (h/t @NBA) pic.twitter.com/uxDOuYxDZg

Not only did Tatum throw down the flush, he had to reach back in mid air to bring the ball down. He also found a way to hold on to the ball after the dunk.

Yeah, the Celtics might be smart to avoid Tatum in trade talks with the Pelicans for Anthony Davis. My word.