The shutout was the first of the season for Sorokin, who has started all five games with Semyon Varlamov battling an undisclosed injury, and the fourth in 26 career starts.

Cal Clutterbuck scored in the first, Brock Nelson tallied in the waning seconds of the middle period, and Anthony Beauvillier collected a goal in the third for the Islanders, who are 2-2-1 through five games of a franchise-record 13-game road trip to start the season.

A turnover by the Coyotes resulted in Clutterbuck’s unassisted goal late in the first.

After Adam Pelech poked the puck free from Ryan Dzingel, Clutterbuck picked it up in the neutral zone and raced up the left side, with teammate Casey Cizikas on the right side. With defenseman Shayne Gostisbehere positioning himself between the two New York players, Clutterbuck eschewed the pass and instead fired a shot over Vejmelka’s shoulder with 3:28 left. 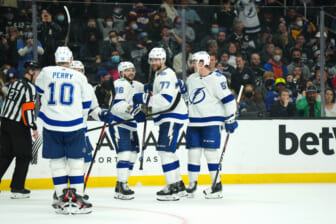 It was Clutterbuck’s second goal of the season, both of them unassisted, and the sixth unassisted score for the Islanders.

A cross-checking penalty on Jay Beagle generated the power play that yielded Nelson’s goal with 10.7 seconds remaining in the second.

Nelson skated up the right side of the ice before issuing a drop pass to Josh Bailey, who was initially credited with the goal before replays showed his shot from just beyond the blue line clipped off Nelson’s skate in the crease.

A goal by Kyle Palmieri was overturned on replay due to goalie interference with 9:39 left, but the Islanders scored just over a minute later.

Nelson dished from center ice to a streaking Beauvillier, who had a step on Clayton Keller and shuffled the puck before going to his backhand and beating Vejmelka from point-blank range.