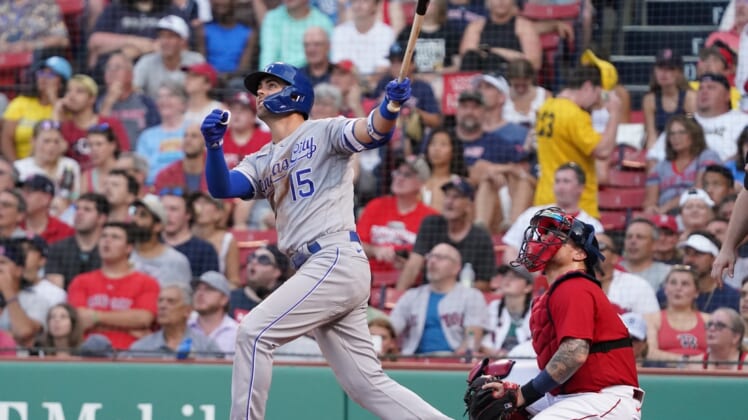 Hunter Renfroe hit a pair of home runs, including a go-ahead solo shot in the sixth inning, and had three RBIs to help the host Boston Red Sox beat the Kansas City Royals 6-5 to open a four-game series on Monday night.

Renfroe also had a two-run homer in the fourth and has 11 this season. It was the 13th career multi-homer game of Renfroe’s career, and his first since Aug. 13, 2020, as a member of the Tampa Bay Rays at Fenway Park.

Red Sox starter Garrett Richards allowed five runs — all courtesy of three home runs — and matched a season high by giving up 11 hits in 5 2/3 innings. He struck out three and did not walk a batter.

Hirokazu Sawamura (4-0) tossed 1 1/3 scoreless innings to earn the win, and Matt Barnes pitched a perfect ninth for his 17th save. Boston has won four straight and five of its last seven games.

Carlos Santana hit a three-run homer and both Michael A. Taylor and Whit Merrifield added solo shots for Kansas City, which has dropped six straight. Royals third baseman Emmanuel Rivera went 2 for 4 in his major league debut, notching his first career hit on a first-inning single.

Royals reliever Josh Staumont (0-2) took the loss after giving up just one hit — the tie-breaking homer to Renfroe — over two innings. Starter Danny Duffy allowed four runs on five hits, including three home runs, with a walk and two strikeouts in 3 1/3 innings.

Santana’s 13th homer of the season on Richards’ 12th pitch of the game in the first inning put Kansas City up 3-0. Boston got a run back as Hernandez led off the home first with a homer — his eighth of the year — for the second straight game.

Taylor’s sixth blast and Merrifield’s seventh of the season put the Royals up 5-1 in the second. Dalbec’s 10th homer in the home second pulled Boston within three.

Renfroe’s first homer in the fourth made it a one-run game, before Chavis’ two-out single plated the tying run later in the inning.