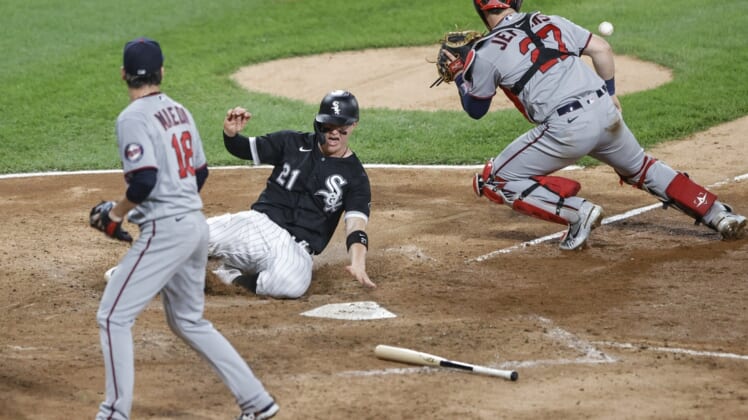 Right fielder Gavin Sheets went 2-for-4 with a double and two RBIs in his major league debut to lead the host Chicago White Sox to a 7-6 victory over the Minnesota Twins on Tuesday night.

Andrew Vaughn also had two hits and Leury Garcia singled, walked and drove in two runs for first-place Chicago, which improved to 25-12 against American League Central teams, including 6-1 against Minnesota.

Lucas Giolito (6-5), who left after allowing a leadoff double to Trevor Larnach in the seventh, picked up the win allowing three runs on six hits. It was the ninth straight game in which Giolito, who walked one and struck out one, pitched at least six innings.

Liam Hendriks, despite giving up a run in the ninth, notched his AL-leading 21st save.

Josh Donaldson homered and Nelson Cruz went 2-for-4 with an RBI double for Minnesota. Kenta Maeda (3-3), who walked four of the first eight batters he faced, took the loss after allowing seven earned runs, matching his career high, on eight hits and five walks over 4 2/3 innings. He struck out four.

Minnesota took a 2-0 lead in the first inning on Donaldson’s 12th home run of the season. The 383-foot line drive into the left field bleachers drove in Luis Arraez, who had singled.

Chicago, taking advantage of three consecutive one-out walks by Maeda, cut it to 2-1 in the bottom of the first on an RBI groundout by Zack Collins.

The White Sox jumped ahead 3-2 in the third when Sheets hit into a bases-loaded fielder’s choice and Garcia followed with an RBI single.

Chicago extended its lead to 7-2 with a four-run fifth inning. Sheets blooped an RBI double down the left field line to start the scoring, and the White Sox also got a sacrifice fly from Garcia and back-to-back RBI singles by Danny Mendick and Tim Anderson.

The Twins cut it top 7-5 in the seventh with RBI doubles by Cruz and Max Kepler and a RBI groundout by Alex Kirilloff.

Minnesota took advantage of Hendriks’ wildness to score in the ninth. Larnach was hit by a pitch to open the inning, and Kepler walked one out later. After both runners advanced on a wild pitch, Larnach scored on Jorge Polanco’s groundout to second with Kepler advancing to third. Hendriks got out of the jam by getting Kirilloff to fly out to center to end the game.