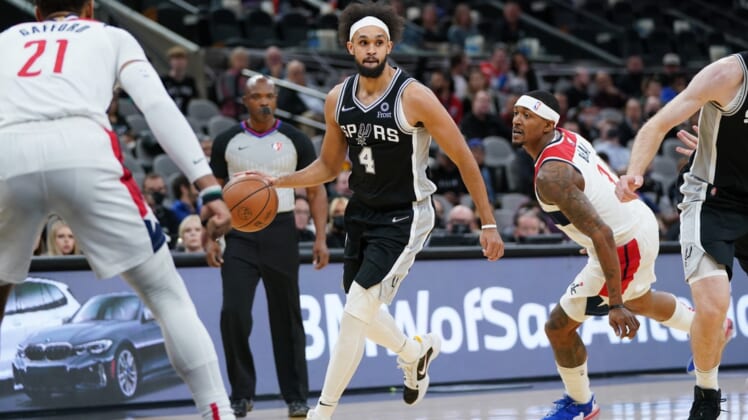 Derrick White had a season-high 24 points and Dejounte Murray added 22 points and 10 rebounds as the San Antonio Spurs pulled away with a hot-shooting fourth quarter in a 116-99 win over the visiting Washington Wizards on Monday.

The Spurs trailed by six points at halftime but rallied to take the lead over the final three minutes of the third quarter and poured it on down the stretch, never allowing Washington to get closer than five points in the fourth period.

It was San Antonio’s second straight win, the first time this season it has had a winning streak.

White scored a career-best 18 points in the third quarter.

Jakob Poeltl added 14 points and 11 rebounds, with Keldon Johnson hitting for 13 and Bryn Forbes and Thaddeus Young scoring 10 points each for San Antonio. The Spurs improved to 5-1 this season in games in which they’ve held opponents to less than 100 points.

The Spurs have won 22 straight games in the Alamo City against the Wizards, Washington’s longest active road losing streak.

The game was tied at 20 after the first quarter as both teams struggled to shoot well from the floor or find any real rhythm. A 3-pointer by Josh Primo, the Spurs’ first-round draft pick, gave San Antonio a 33-31 advantage with 5:48.

But Washington rallied to go in front on Raul Neto’s three-point play and stayed on top for the rest of the half, using a jumper by Kuzma with 1.3 seconds left to take a 51-45 lead into halftime.

Gafford led all scorers with 11 points at the half on 5 of 7 shooting from the floor. Beal had just 9 points for the Wizards while going 4 of 12 on his field goal attempts. Washington was just 1 of 12 from beyond the arc in the half.

Poeltl led the Spurs with 10 points and 7 rebounds in the first half.