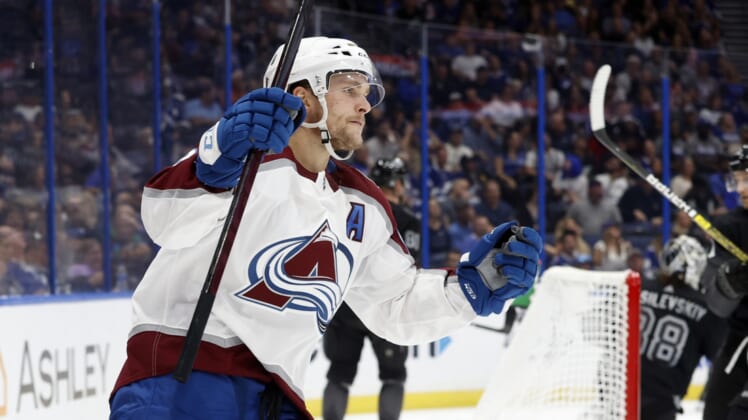 Cale Makar scored the deciding goal in the sixth round of the shootout as the Colorado Avalanche broke a three-game losing skid by defeating the host Tampa Bay Lightning 4-3 on Saturday.

After Victor Hedman and Steven Stamkos netted goals for the Lightning and Colorado’s Mikko Rantanen and Gabriel Landeskog answered, Avalanche goalie Darcy Kuemper stuffed Anthony Cirelli in the top of the sixth frame.

Makar skated in, threatened to go backhand and quickly fired the winning shot past Lightning goalie Andrei Vasilevskiy for the win.

Nathan MacKinnon notched a goal and two assists in regulation, while Landeskog registered a goal and a helper.

Makar chipped in two assists and defenseman Ryan Murray skated in his 400th NHL game, while Kuemper stopped 29 of 32 shots.

Stamkos scored his team-leading fourth goal and had an assist, pushing his career point total to 875 and sending him past Vincent Lecavalier for second all-time in franchise history.

Mathieu Joseph tallied for the first time, and Brayden Point also scored for the Lightning, who are 0-2-1 at home.

Vasilevskiy allowed three goals on 27 shots and lost for just the fifth time in 20 career shootouts.

After being held scoreless over the opening 20 minutes, Tampa Bay remained the only team in the NHL that has not scored in the first period.

In the first Florida meeting between the teams in two years, the Avalanche went up 1-0 when Landeskog cleaned up a loose puck at 9:02 by slipping a rebound past Vasilevskiy for his second goal.

The tally marked the fifth straight time Tampa Bay allowed the first goal in a game. The Chicago Blackhawks and Minnesota Wild are the only other clubs to fail to score first.

After killing off another Colorado power play, the Lightning evened it at 1 when Joseph’s backhanded swat somehow found its way past Kuemper at 6:34, but the tie game was short-lived.

On a two-on-one break just over five minutes later, the high-scoring MacKinnon and Rantanen raced into Tampa Bay’s end on a speedy rush.

The Finnish winger then one-timed a slick pass from MacKinnon for his third marker and a 2-1 advantage.

In the third, Stamkos’ tally in front of Kuemper knotted it at 3:44, but MacKinnon rocketed a blast at 9:50 for his first tally.

Point tied it for the third time with 2:35 remaining in regulation.