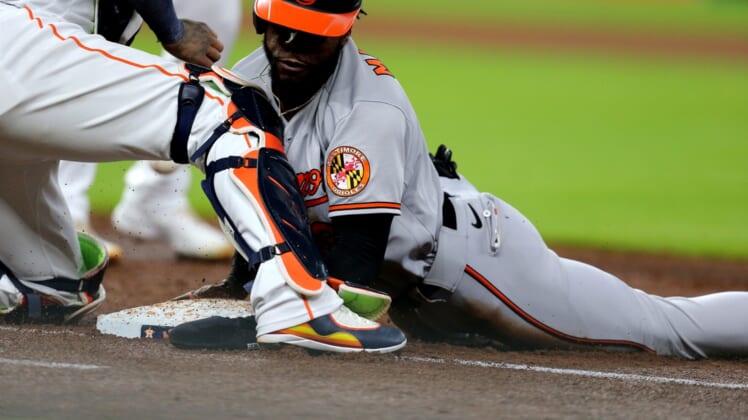 Cedric Mullins recorded his third four-plus-hit game of the season and Maikel Franco delivered a bases-clearing double that keyed a five-run eighth inning as the Baltimore Orioles slugged their way to a 13-3 road victory over the Houston Astros on Tuesday.

The Orioles clinched their first road series victory taking two of three against the Seattle Mariners from May 3-5. Baltimore entered the series having lost 22 of their past 23 road games.

Mullins tagged Urquidy with a home run, his 14th, leading off the game and added a run-scoring double with two outs in the seventh that gave the Orioles a 4-3 lead.

Mullins (4-for-5, walk, two RBIs) notched his second extra-base hit of the night off Astros reliever Ryne Stanek, who allowed five runs on four hits while issuing a pair of walks in one laborious inning.

Santander extended the Baltimore lead to 5-3 with his fifth homer with one out in the eighth. Stanek sandwiched a pair of walks around a Domingo Leyba single before Franco roped a double to center that scored Ryan McKenna, Leyba and Urias and upped the lead to 8-3.

Of the six relievers who pitched for the Astros, only Andre Scrubb did not allow a hit. Scrubb did, however, issue three walks over his 2 2/3 innings after Urquidy departed.

On Monday, seven Baltimore pitchers worked around 10 walks en route to a 9-7 win in the series opener. The Orioles issued nine walks on Tuesday, but the Astros again struggled to parlay those free passes into runs. Houston finished 1-for-8 with runners in scoring position and stranded 12 baserunners en route to its third consecutive defeat.