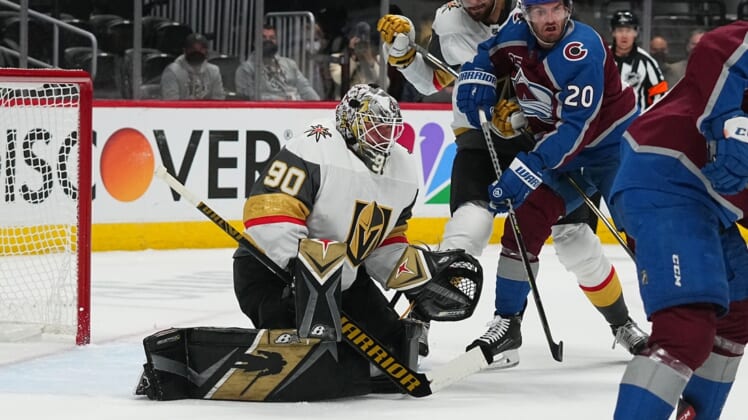 May 30, 2021; Denver, Colorado, USA; Vegas Golden Knights goaltender Robin Lehner (90) defends his net from left wing Brandon Saad (20) in the first period of game one in the second round of the 2021 Stanley Cup Playoffs at Ball Arena. Mandatory Credit: Ron Chenoy-USA TODAY Sports

Nathan MacKinnon and Gabriel Landeskog both scored twice in three-point games while Cale Makar netted one goal and three assists to lead the Colorado Avalanche to a 7-1 drubbing of the Vegas Golden Knights on Sunday in Denver to kick off their second-round playoff series.

Mikko Rantanen added one goal and one assist, while Brandon Saad also tallied in the win. Goaltender Philipp Grubauer made 24 saves for Colorado, which has won all five of its Stanley Cup playoff games this spring.

William Karlsson replied for the Golden Knights, who were overmatched and a step behind the hosts all game, likely a product of needing seven games to dispatch the Minnesota Wild in their opening-round series. Goalie Robin Lehner stopped 30 shots.

The Golden Knights will look to even the series that features the top two teams in the regular season Wednesday in Denver.

With a week between games after sweeping the St. Louis Blues, Colorado’s fear was rust, but that was definitely not an issue. Rantanen started the beatdown at the 4:55 mark when he converted a sharp-angled backhand. Landeskog doubled the lead at 10:13 when he zipped a shot home from the wing.

The hosts followed that start by going to another level with a four-goal second period. Saad extended the Colorado lead 64 seconds into the second period when a loose puck came to his stick at the doorstep, and then MacKinnon made it a 4-0 game three minutes later with a five-hole shot.

Landeskog’s power-play goal, an easy redirect with 5:37 remaining in the second period, continued the onslaught before Karlsson put the Golden Knights on the board when he redirected a pass for the tap-in tally 36 seconds later. 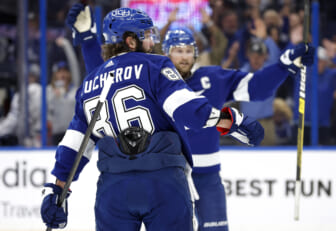 But MacKinnon used his blazing speed to zip around the defenders before lifting a forehand for his eighth goal of the playoffs with almost three minutes remaining in the middle frame. Makar rounded out the scoring at 15:49 of the third period.

The game turned ugly in the middle of the third period. Colorado’s Ryan Graves injured Mattias Janmark with a late hit in the second period. In retaliation, Vegas forward Ryan Reaves responded in the final frame by first cross-checking Grubauer in the back of the head and then attacking Graves, for which Reaves received a match penalty and game misconduct.