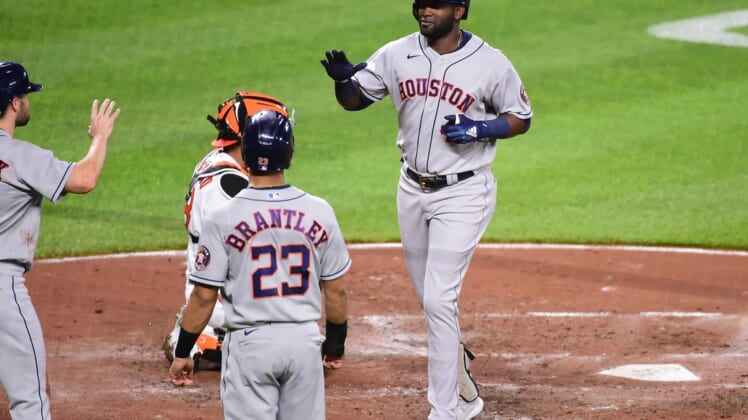 Jake Odorizzi and Cristian Javier combined to carry a no-hitter into the eighth, and Yordan Alvarez hit a three-run homer as the visiting Houston Astros extended their winning streak to eight games with a 10-2 victory over the Baltimore Orioles Monday night.

The Astros came into the game as the third-best team in the majors — by percentage points — and did not let up. Houston now has won 12 of its last 14 games while the Orioles have dropped 11 of their past 12 contests.

There was a one-hour rain delay at the start but starter Odorizzi (2-3) proved too much for the slumping Orioles. Odorizzi struck out nine in five hitless innings and gave up only a fifth-inning walk to DJ Stewart.

Javier came on in the sixth and took care of the next two frames before Brandon Bielak entered in the eighth and lost the no-hitter when Mikael Franco hit a two-run homer with one out. The Orioles had just two base runners in the game before the Franco homer. Stevie Wilkerson added a single later in the inning.

For the Orioles, rookie Keegan Akin (0-3) lasted four innings plus one batter and his main problems came in the third. Overall, the left-hander allowed five runs on six hits despite throwing well at times.

Akin got into trouble in the third and couldn’t escape. Chas McCormick’s RBI single made it 1-0, and Yuli Gurriel added a sacrifice fly before Alvarez followed with his three-run homer to left for a 5-0 lead.

Houston stretched it to 7-0 in the seventh with a Gurriel sacrifice fly plus a Carlos Correa sacrifice fly. Then came the second rain delay of the night in the top of the eighth, which lasted 41 minutes, before Brantley golfed a two-run double to deep center. Pinch-hitter Garrett Stubbs followed with an RBI double that gave the Astros a 10-0 lead.

They still held out hope for the no-hitter before Franco blasted his two-run homer in the bottom of that inning. The Orioles finished with two hits.