Anthony Edwards scored 26 points, Karl-Anthony Towns added 22 points and the Minnesota Timberwolves held on for a 107-97 win over the Sacramento Kings on Wednesday night in Minneapolis.

De’Aaron Fox led Sacramento with 28 points on 10-for-20 shooting. Buddy Hield chipped in 16 points off the bench, and Harrison Barnes finished with 13 points.

The Kings never got the lead under six points the rest of the way. Towns and Jaden McDaniels had slam dunks on back-to-back possessions to help seal the outcome.

Sacramento went on a 7-0 run early in the fourth quarter to tie the score at 79-all. Hield drilled back-to-back 3-pointers to fuel the spurt. 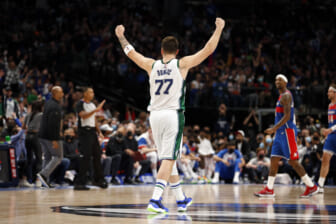 After Sacramento scored the game’s first four points, Minnesota enjoyed an 8-0 run to pull ahead. But neither side led by more than five points during the first quarter, which ended with the Timberwolves on top 22-18.

Timberwolves forward Naz Reid returned to action after missing one game because of a right foot injury. He had eight points and two rebounds in a reserve role.