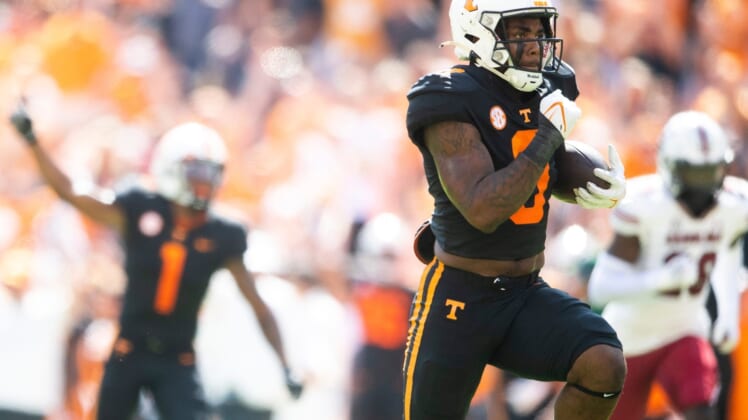 Tennessee running back Tiyon Evans (8) runs for a touchdown during a NCAA football game between the Tennessee Volunteers and the South Carolina Gamecocks at Neyland Stadium in Knoxville, Tenn. on Saturday, Oct. 9, 2021.Kns Tennessee South Carolina Football Bp

Hendon Hooker tossed three touchdown passes and ran for one score as the host Tennessee Volunteers rolled to a 45-20 win over the South Carolina Gamecocks on Saturday afternoon in Knoxville.

Tennessee (4-2, 2-1 SEC) also got 119 yards and one touchdown on 16 carries from running back Tiyon Evans, who left the game due to a leg injury in the third quarter.

South Carolina (3-3, 0-3) got two touchdown runs from Kevin Harris. Luke Doty completed 19 of 31 passes for 167 yards. He was not intercepted, but he lost one fumble.

Tennessee — for the second week in a row — scored 28 points in the first quarter. Last week, the Volunteers overwhelmed Missouri 28-3 in the opening 15 minutes. On Saturday, the Vols dominated South Carolina, 28-0.

First, the Vols constructed a methodical 14-play, 66-yard drive, converting on third down four times. The TD was a 3-yard pass from Hooker as Jalin Hyatt in tight coverage.

Tennessee made it 14-0 on Hooker’s 39-yard toss over the top to JaVonta Payton. It was Payton’s fourth straight game with a touchdown grab.

South Carolina then put together a 10-play, 75-yard drive. But after getting a first-and-goal at the 1-yard line, the Gamecocks tried a trick play, and it failed as Jalen Brooks’ toss into the end zone was intercepted by Jaylen McCullough.

On the next play from scrimmage, Doty fumbled the snap, and the ball was recovered by Tennessee’s Aaron Beasley.

From there, Hooker connected with Jones on a 21-yard TD pass and a 28-0 lead.

South Carolina finally scored with 2:04 left in the first half on Harris’ 6-yard run.

Tennessee ended the half on Chase McGrath’s 25-yard field goal with no time left, giving the Vols a 38-7 lead.

South Carolina used a trick play for the game’s only third-quarter score. Punter Kai Kroeger connected with Payton Mangrum on a 44-yard TD pass. It was the first career catch for Mangrum, a walk-on receiver.

The Gamecocks cut their deficit to 38-20 with 12:18 left in the final quarter as Harris scored from a yard out on fourth down, but Tennessee put the game away on Len’Neth Whitehead’s 2-yard TD run with 4:45 left.