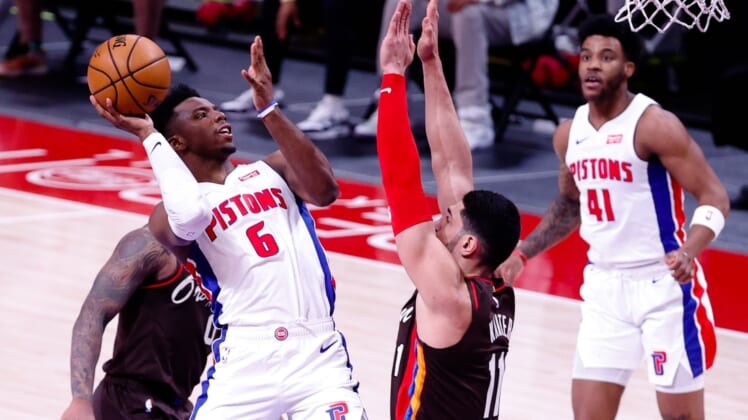 The Washington Wizards begin a run of 7 of 8 games on the road Thursday when they visit the Detroit Pistons.

The Pistons enter the matchup on the second leg of a back-to-back. Their 124-101 home loss to the Portland Trail Blazers on Wednesday marked their fifth defeat in the past six games, plunging them deeper into the Eastern Conference cellar.

Detroit heads into the Thursday slate three games behind the 14th-place Orlando Magic.

Jerami Grant scored 30 points in the loss, rebounding from a pair of single-digits scoring efforts in the Pistons’ previous two games, against Washington and Toronto. Saddiq Bey, Hamidou Diallo and Saben Lee all scored 19 points to pick up the slack Monday in Detroit’s 118-104 win over the Raptors, a result that snapped a four-game losing skid.

Lee scored just two points on Wednesday, however, and Bey went scoreless. Diallo, playing in his third game since being acquired from the Oklahoma City Thunder, provided a spark off the bench with another 19-point performance.

“He plays hard,” Pistons coach Dwane Casey said of Diallo in his postgame press conference. “He runs the floor, he plays at that pace that’s hard to compete against on most nights. He’s earning (his playing time).”

Among Detroit’s losses in its most recent slump was a 106-92 defeat at Washington on Saturday. Russell Westbrook went for 19 points, 19 rebounds and 10 assists in the Wizards’ win.

It was the first of three straight triple-doubles for Westbrook, who has 17 this season. He set the Washington career record on Monday with his 16th in a 132-124 win over Indiana — and he has yet to play a full season with the team.

Westbrook’s 35 points, 21 assists and 14 rebounds against the Pacers made him the NBA’s first player to record a triple-double of at least 30 points, 20 assists and 10 rebounds since Magic Johnson in November 1988.

“He always has the ball. He’s a great playmaker,” teammate Rui Hachimura said following the Wizards’ 114-104 loss to the Charlotte Hornets on Tuesday. “He always gives us good opportunities.”

With 163 in his career, Westbrook is just 18 triple-doubles shy of matching Oscar Robertson’s all-time NBA record.

The Wizards guard finished with 22 points, 15 rebounds and 14 assists against Charlotte, and Hachimura tied a career high with 30 points, but it was not enough to extend Washington’s modest winning streak to three games.

Washington played its past two games without the NBA’s leading scorer, Bradley Beal, who was limited to 17 points in fewer than 21 minutes last time against Detroit. He is listed as day-to-day with a hip injury.

Washington’s Daniel Gafford is out with an ankle injury while Raul Neto (ribs) and Davis Bertans (calf) are day-to-day.

Rookie Isaiah Stewart has shared time at center with Mason Plumlee in Okafor’s absence. Casey said in his postgame press conference on Wednesday that Stewart would see playing time at forward upon Okafor’s return.