Warriors owner: Team will be aggressive during the summer 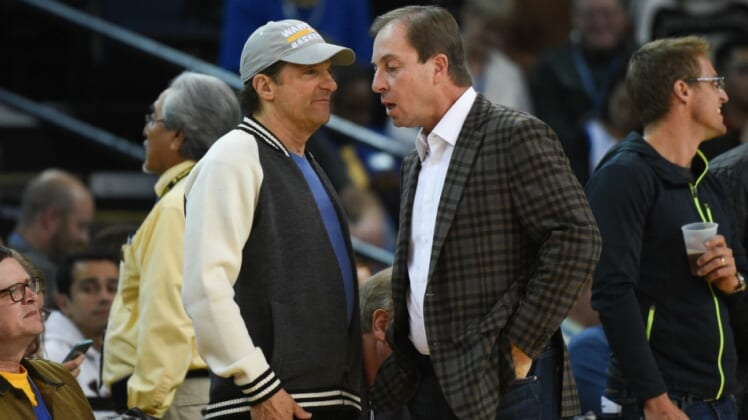 An otherwise historical season for the Golden State Warriors came to a gut-wrenching conclusion Sunday night after the team fell to the Cleveland Cavaliers in Game 7 of the NBA Finals.

As fans and players alike look to move on from this most disappointing end to the season, the Warriors’ front office is getting down to brass tax with the NBA draft scheduled for later this week and free agency on the horizon.

Such is the nature of the beast in a NBA calendar that moves quicker than any of the other four major sports in North America.

Following his team’s loss on Sunday night, Warriors owner Joe Lacob made a point to indicate that they won’t be resting on their laurels. Instead, he expects the defending Western Conference champions to be very active in free agency and the trade market.

Warriors owner Joe Lacob, on what's next for his team, said firmly on his way out of Oracle: "All I can say is I will be very aggressive."

There wasn’t any more context given to the comments. Though, one could easily construe this to mean that the Warriors are going to look to make a big splash during the summer.

Rumors over the past several months have mentioned former MVP Kevin Durant as a real option for the Warriors (more on that here).

What might have seemed a bit ridiculous as the team went through its 73-win regular season now could have a bit more substance to it.

Harrison Barnes is slated to become a restricted free agent and is coming off a disastrous Finals performance that saw him average 9.3 points while shooting 35 percent from the field. Depending on how his market plays out, the Warriors might be smart avoiding an overpay situation there.

Golden State also has a decision to make as it relates to fellow restricted free agent Festus Ezeli. The big man was a no-show during the Finals, averaging 2.0 points and 1.9 rebounds. Some team will surely overpay for his services in free agency, primarily due to his ability to rim protect and the upside he possesses.

Despite the cap increasing to $94 million (35 percent higher than 2015-16), Golden State would still need to make some other cost-cutting moves to fit Durant in under the salary cap. The team is $18 million under the projected cap.

One thing that became readily apparent after starting center Andrew Bogut went down with a knee injury in Game 5 was the lack of a rim protector. Out of necessity, Golden State went small. This had to do with Ezeli’s struggles to provide anything of substance.

With Bogut’s checkered injury history, Golden State could also make the decision to replace him with another big that can actually be relied on when it matters the most. In this, someone like Dwight Howard could make a ton of sense.

Remember, the Warriors were one of the finalists to land him before he signed with the Houston Rockets back in 2013. There could definitely be a marriage in the works here.

As it is, no one should be terribly surprised by Lacob’s post-game comments from Sunday. This ownership group has proven that it will do everything possible to put a winning product on the court, even if it means going well over the luxury tax.

Losing the way the Warriors did and with more cap room than in previous seasons, there could very well be a big name or two added to the team’s roster in the coming months.