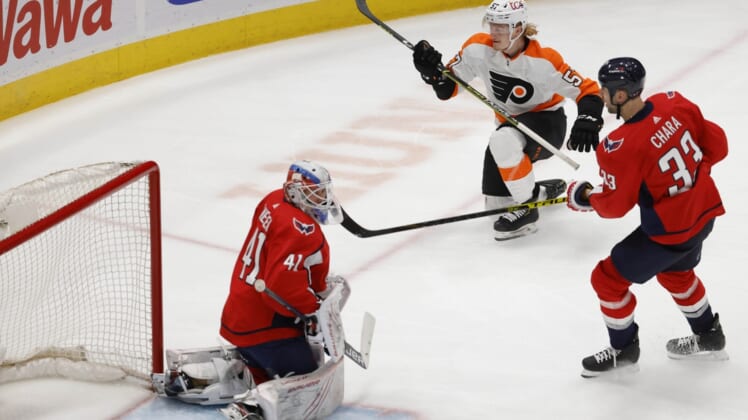 The Washington Capitals missed a chance to tie Pittsburgh for first place in the East Division as the visiting Philadelphia Flyers got two goals from Wade Allison in a 4-2 victory Friday night.

The loss left Washington (34-15-5, 73 points) still two points behind the Penguins (36-16-3, 75 points) in the battle for first. The Caps have two games left, both at home. They’ll get the Flyers Saturday and Boston Tuesday. Two regulation wins in those last two games would give Washington the top spot in the division.

The Flyers (24-23-7, 55 points) had lost five in a row to Washington, but Philadelphia never trailed Friday. Goalie Brian Elliott played a strong game for the Flyers, finishing with 28 saves and an assist on Sean Couturier’s empty-net goal in the final minute.

The Flyers have been eliminated from the playoffs but played strong from the start. They took a 1-0 lead when Joel Farabee scored from the doorstep just 1:44 into the game.

Daniel Sprong scored later in the period, but the referees and video review disallowed it as the Capital winger was ruled to have kicked the puck into the net.

But Sprong, who has filled in well for Ovechkin on the top line, scored with 3:41 remaining in the period on a shot from between the circles.

The Flyers then took a 3-1 lead thanks to the two Allison goals in the second period. His second goal came with 5:15 to go in the frame. But T.J. Oshie made it 3-2 when he redirected a shot past Elliott with 1:09 remaining in that period.

The Capitals had some chances in the third period, but Philadelphia kept them out of the net and put it away with Couturier’s empty-netter.

The injury-depleted Caps played without Alex Ovechkin for the sixth time in seven games due to a lower-body injury. Justin Schultz sat for his third straight game after a lower-body issue.

Evgeny Kuznetsov and goalie Ilya Samsonov both are on the Covid-19 protocol list, and their return is uncertain. Sprong came back after missing Wednesday’s game with the Rangers due to an illness, and Tom Wilson returned after leaving that contest early due to an upper-body injury.