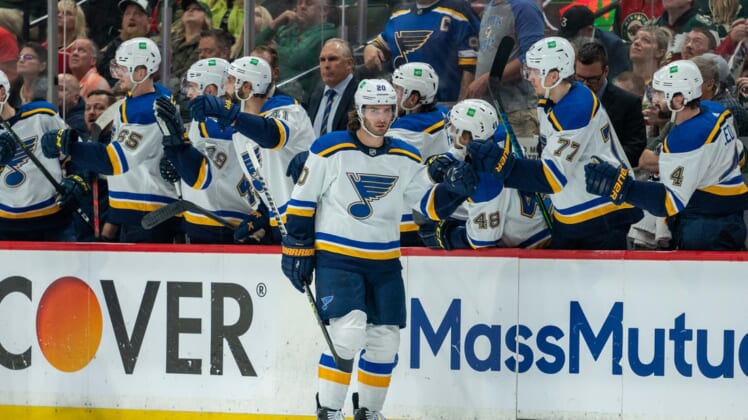 Vladimir Tarasenko scored three goals, all in the third period, to lead the visiting St. Louis Blues to a 5-2 win against the Minnesota Wild in Game 5 of their Western Conference first-round playoff series on Tuesday in Saint Paul, Minn.

Game 6 of the best-of-seven set is Thursday in St. Louis.

Kirill Kaprizov scored two power-play goals to give him seven tallies in the series for the Wild, who were leading 2-1 midway through the game. Marc-Andre Fleury stopped 27 shots in the defeat.

The Blues took a 3-2 lead at 1:03 of the third period. St. Louis dumped the puck in the Minnesota zone and Pavel Buchnevich got to it first behind the net before passing to Tarasenko in front for the one-timer.

Tarasenko then scored off a rush on a wrist shot from above the right circle to make it 4-2 at 2:31.

Tarasenko finished off the hat trick by scoring into an empty net for a 5-2 lead with 1:33 left.

The Blues took an early lead with their sixth power-play goal of the series.

O’Reilly was the first player to reach a loose puck in front of the Minnesota net, and he shot it past Fleury for a 1-0 lead at 4:53 of the first period.

Minnesota went on its first power play when Nick Leddy was called for interference at 12:11 of the first period, and Kaprizov scored for the fourth straight game to tie it 1-1 at 13:15.

Kaprizov drew a slashing penalty on Robert Thomas and then scored his second goal short-side over Binnington’s right shoulder for a 2-1 lead with 2:53 left in the opening period.

Saad tied it 2-2 at 15:28 of the second period when he redirected a centering pass from Jordan Kyrou.

Kaprizov passed Wes Walz and Marian Gaborik for the most goals by a Minnesota player in one series.

Binnington won his 18th playoff game with the Blues, breaking the team record he previously shared with Mike Liut and Greg Millen.