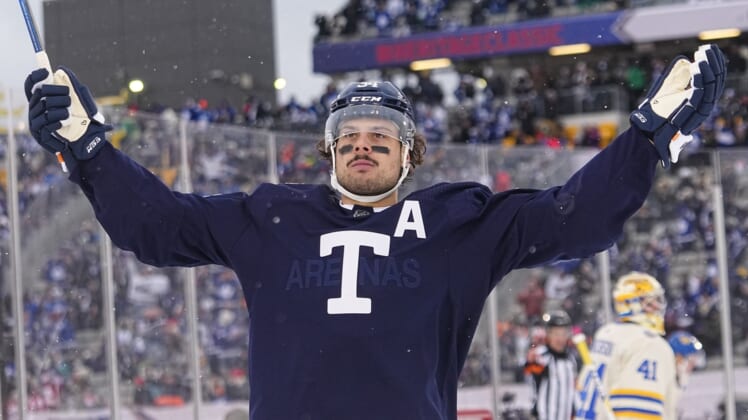 The Dallas Stars won’t have to face NHL goals leader Auston Matthews on Tuesday night when they open a four-game trip against the Toronto Maple Leafs.

Matthews was suspended for two games by the league on Monday for cross-checking Rasmus Dahlin in the neck late in the third period in Sunday’s 5-2 loss to the Buffalo Sabres.

“It’s battling in front of the net,” Matthews said after the game. “I felt like I kind of rode up his shoulder, and his shoulder pad rolled up a little bit. That’s hockey, it’s competitive out there, guys are physical and trying to compete.”

Matthews scored his 45th goal of the season Sunday in the outdoor Heritage Classic in Hamilton, Ontario. He is on a five-game point streak with eight goals and one assist.

The Maple Leafs and Stars have each lost their past two games.

The Stars lost 7-4 to the New York Rangers on Saturday despite scoring the first two goals. The game in Toronto will start a stretch of nine of 11 games on the road for Dallas.

Toronto’s defensive woes continued Sunday. With No. 1 goaltender Jack Campbell out with a rib injury, Petr Mrazek made 33 saves and allowed four goals.

One of the goals was deflected by Toronto defenseman TJ Brodie’s skate and tied the game 2-2.

“We got some momentum, but their second goal off our foot was a tough bounce, and we didn’t get enough offense to make up for it,” Maple Leafs coach Sheldon Keefe said.

Another goal from a sharp angle squeezed past Mrazek. Another came after Mrazek had inadvertently dislodged the net from its moorings. The fifth was scored into an empty net.

It was the 10th time in its last 12 games that Toronto allowed at least four goals.

The Maple Leafs have struggled against some of the weaker teams. They lost to the Sabres at home 5-1 on March 2.

“There’s no such thing as an off night in this league,” Leafs defenseman Morgan Rielly said. “Teams are hungry, guys are playing for contracts. We talk about all the right things in the room before the game, whether it was this one or playing these guys two weeks ago, or Arizona or Seattle. But teams come out and play us hard, and it’s on us to respond. I don’t think it’s an issue for us long-term, but right now it’s tough sledding.”

The Stars are playing without stalwart defenseman Miro Heiskanen, who is out with mononucleosis.

“He’s a huge part of this team,” said defenseman Ryan Suter. “He’s good in every situation, he’s calm, he can skate, he makes great plays and he’s a great player. With him being out, we’re going to have to reset and refocus, and just get back to keeping it simple.”

Jani Hakanpaa has filled in for Heiskanen as Suter’s defense partner.

“It’s been fun,” Hakanpaa said. “He’s a great player, and I’m just trying to learn from him. He’s been around the business for a long time.”

This will be the first meeting of the season between the teams.