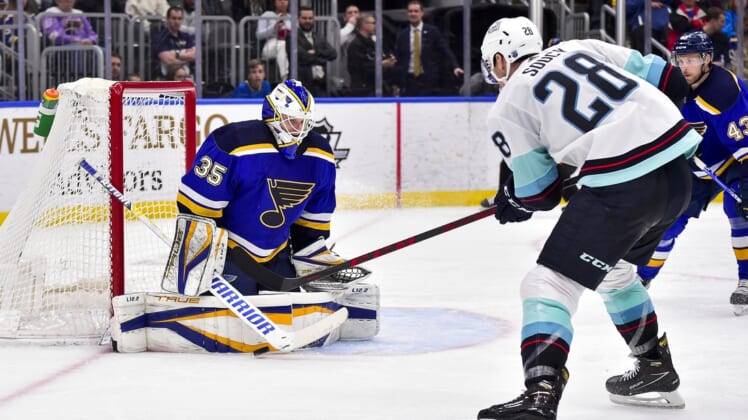 Jordan Eberle scored and Chris Driedger made 32 saves for the Kraken.

The Blues had six power plays and the Kraken had one. The Blues outshot the Kraken 36-29.

In the first half of the first period the Blues got three power plays. They finally took advantage to take a 1-0 lead after Husso had to make three excellent short-handed saves.

Thomas triggered and then finished a 3-on-2 power-play rush with Ivan Barbashev and Pavel Buchnevich 8:38 into the game. Thomas has four goals and eight assists during his seven-game point streak.

Faulk made it 2-0 at the 7:56 mark of the second period by making a back-door cut through the left circle to convert Schenn’s diagonal pass from the right wing.

The Kraken cut the deficit to 2-1 a little more than 2 minutes later. Will Borgen moved in from the left point and had his shot partially blocked, but Eberle went to the front of the net to jam the rebound home.

Kyrou restored the Blues’ two-goal lead 2:34 into the third period. He tracked a bouncing puck toward the front of the net and backhanded it out of mid-air past Driedger to make it 3-1.

That was Kyrou’s first goal since March 6.

With Driedger pulled for an extra attacker, O’Reilly iced the game with an empty-net goal with 1:15 left.