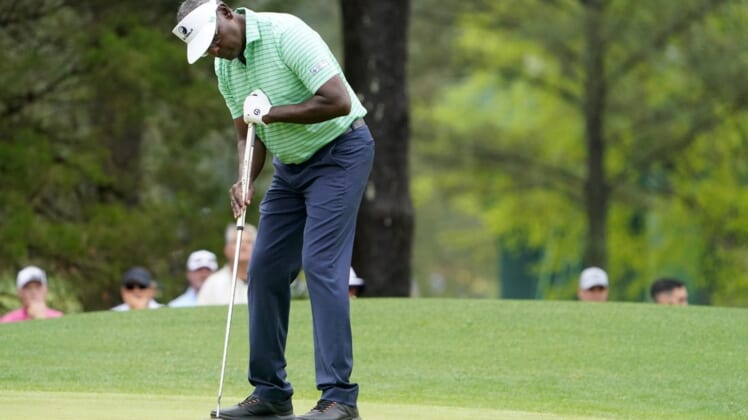 Vijay Singh, Darren Clarke and Jim Furyk shot rounds of 7-under-par 65 Friday to form a three-way tie atop the leaderboard after one round of the Dick’s Sporting Goods Open in Endicott, N.Y.

The high-profile trio combined for five major championships in their younger days before winning one senior major apiece. They lead Duffy Waldorf and Irishman Padraig Harrington (66) by one shot at En-Joie Golf Club.

Singh, the former world No. 1 from Fiji, is looking for his first win on the PGA Tour Champions since 2018. The highlight of his round was a chip-in eagle at the par-5 third hole to go with six birdies and one bogey.

“Just trying to work hard at it again,” Singh said. “I got a second wind. I figured out that just hanging back and just relaxing and hitting a few balls ain’t going to cut it for me, so I decided to go back and look at some of the things that I used to do that worked and started doing that again. Practicing a little bit more, not excessively, but more than I’ve been.”

Clarke, still playing well off last month’s victory at The Senior Open Championship, bounced back from his only bogey of the day on No. 9 with a long birdie putt at the par-4 10th. He finished with eight birdies.

“Been messing about with the (putter) this week a little bit in practice again and then just went back to the one that I won with at Gleneagles there a few weeks ago,” the Northern Irishman said.

Furyk also tallied eight birdies and one bogey in his first start since recovering from a bout of COVID-19.

“I feel a lot better,” Furyk said. “I think a lot of it was attitude. You know, I’ve been away from the game for a while. It’s nice to be out. … You come back from a long time off, maybe six weeks since I’ve played in a tournament, and I did a good job of getting the ball up and down, knocked in a bunch of putts, just really scored well and managed my game well.”

Ernie Els of South Africa, Mike Weir of Canada, Y.E. Yang of South Korea and Brandt Jobe were tied for sixth at 5-under 67. Defending champion Cameron Beckman opened with a 1-over 73.