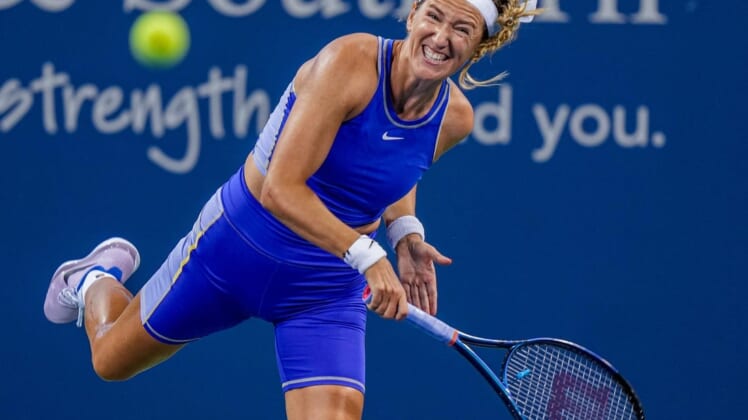 Azarenka is from Belarus, a neighboring country of Ukraine that is supporting Russia in the invasion of Ukraine. Marta Kostyuk and Lesia Tsurenko, both of Ukraine, recently were critical of Azarenka’s involvement at the event in New York.

Wednesday also is the Independence Day of Ukraine.

“In the last 24 hours, after careful consideration and dialogue with all parties involved, Victoria Azarenka will not be participating … this evening,” the U.S. Tennis Association said in a statement released Wednesday. “Vika is a strong player leader and we appreciate her willingness to participate. Given the sensitivities to Ukrainian players, and the ongoing conflict, we believe this is the right course of action for us.”

Kostyuk declined an invitation to participate in the event due to Azarenka’s involvement. She said other Ukranian players did, too.

“I don’t understand how human it really is,” Kostyuk told BTU, a Ukranian publication, of Azarenka. “Why does she do it and why does she go for it? Purely human, because she knows from our words how we cannot tolerate them here, how we want them not to be at any tournament, like in England. Despite this, she goes for it. She doesn’t even communicate with us, but here she just takes and does. I can’t understand why.”