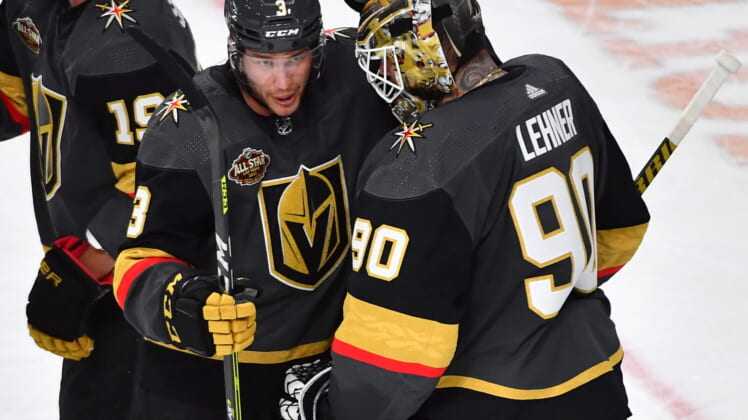 The Golden Knights’ roster looks very different now than it will later in the season when everyone is healthy. Saying that, their current setup allows for a few of the young players in their organization to get an opportunity to show off their skills.

Not only are some young players getting into the lineup for the first time, other depth players are getting chances to play in outsized roles. This has been a test of the Golden Knights’ depth and they hope to find some gems in the rough in their lesser-known players.

Head coach Peter DeBoer has been forced to use new line combinations this season but that has led to some new discoveries. The combination of Marchessault, Roy, and Smith has performed well. Usually, those wingers are centered by William Karlsson but he is missing time with a broken foot and isn’t expected back for a few weeks.

On defense, Nicolas Hague has had a bit of a breakout season and hasn’t looked out of place at all despite playing a larger role. His continued development has been one of the bright spots of the year so far and the Golden Knights will be relying on him to continue his strong play.

The Golden Knights schedule includes most of their remaining games this month at home in front of their fans at T-Mobile Arena. That will be a welcome development for a team that just finished a road trip through the eastern part of Canada and the United States.

Their games against the Oilers stand out as a divisional matchup that will have important implications on the playoff picture. Every point is more valuable when you can steal it from a rival and the Golden Knights will have that game circled on the calendar. The Oilers are currently first in the Pacific Division so this should be a good test. 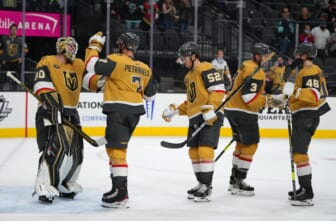 The Golden Knights have had an up-and-down start to the season thus far. They began the season with a difficult losing streak that left them at the bottom of the Pacific Division after a few games. However, they bounced back in a major way and rallied together a small winning streak, bringing their record back to above .500.

They’ve put together quite the winning streak and that has allowed them to remain close to a playoff spot despite the tough start. As more and more of their players return from injury, this Golden Knights team has a chance to rocket towards the top seed in the division.