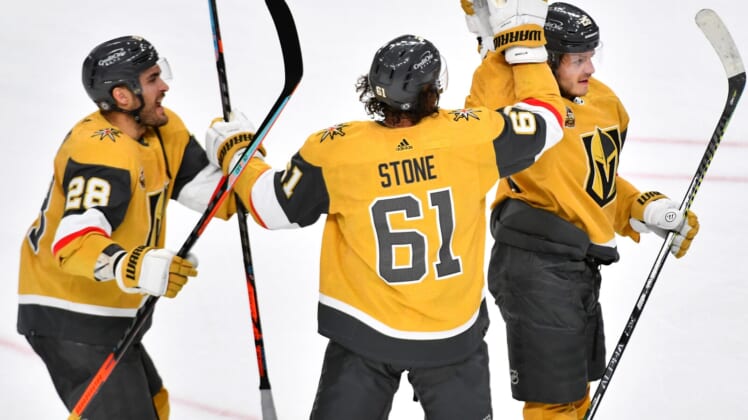 The Vegas Golden Knights scored three consecutive goals in the third period to beat the Dallas Stars 5-4 on Wednesday night. While the Golden Knights dominated play at 5-on-5, the game remained competitive because of their weak penalty kill and the fact that the Stars goalie, Braeden Holtby, was on fire. Despite those forces working against them, the Golden Knights found a way to win this game, largely powered by their captain Mark Stone.

Robin Lehner got the nod as the starter Wednesday but wouldn’t make it through the entirety of the second period as coach Peter DeBoer decided to give backup Laurent Brossoit a chance after Lehner allowed three goals on the first ten shots. All three of those goals came while the Stars were on the power play and it’s difficult to place all the blame on Lehner. However, the switch seemed to give the team a little bit of energy that helped propel them to victory.

“I don’t pull goalies very often. I just felt it was the right thing to do tonigh,” said DeBoer after the game. “You could argue all three [goals] hit something but they still went in. That’s on our PKers and goalie.”

Wednesday night’s performance from Mark Stone shows exactly why he’s one of the best players in the NHL. He was everywhere on the ice and ended the night with two goals and an assist. Not only was he great offensively, but he also wins a ton of puck battles and is one of the best defensive forwards in the NHL.

There’s a reason that Stone was named the first captain in Golden Knights history and games like tonight show why he’s so deserving of the role. He inspired all his teammates to keep pushing and it paid off as the Golden Knights escaped with two points.

Anyone that watches the Golden Knights know that he plays with a special level of intensity, something perhaps best displayed through his energetic goal celebrations.

“I’ve never seen someone get so excited.”, said Alex Pietrangelo postgame, “He almost broke my hand on that one goal [celebration].”

The Golden Knights were downright dominant at 5-on-5 Wednesday night and deserved to win this game. They outshot the Stars 45-23 and spent most of their time on the attack, buzzing around the net as they looked to create scoring chances. The only reason this game was as close as it was is that the Stars went 3/3 on the power play while the Golden Knights couldn’t score on any of their three chances.

While they were able to make up that deficit tonight because of their strong play at even-strength, that won’t always be possible and this is a reoccurring issue that they will need to fix. This will be especially crucial if they want to make a deep playoff run as teams with strong special teams usually go very far.

While they have plenty of time left before the games start to really matter, having issues like this one consistently show up is something the Golden Knights need to fix.

The Golden Knights play their next game on Friday night at 7 PM Pacific. They will host the Philadelphia Flyers at T-Mobile Arena.