Utah begins its season with blowout of Long Island 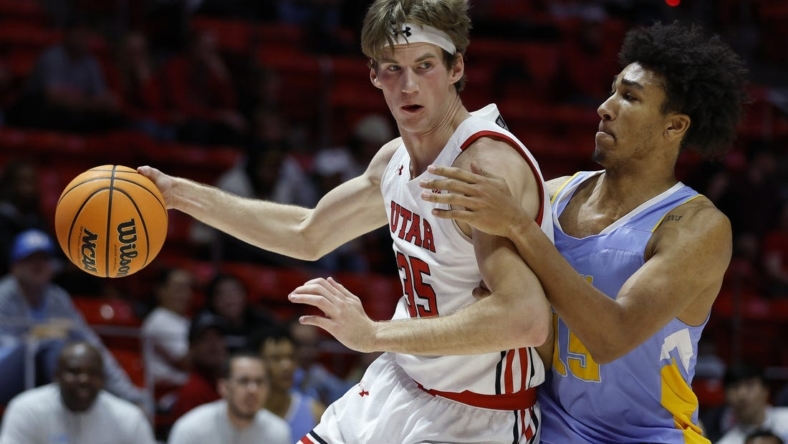 Gabe Madsen added 13 points for the Utes, going 7 of 7 at the foul line. Freshman Wilguens Exacte hit for 12 off the bench, while Mike Saunders and Rollie Worster each chipped in 11 points. Utah controlled the boards 53-34 and committed only seven turnovers, more than making up for 41.7 percent field goal shooting.

Tre Wood scored 11 points for the Sharks, playing their first game under new coach Rod Strickland. The former NBA All-Star, who recently served as an assistant coach for John Calipari at Kentucky, was hired to replace Derek Kellogg in late June.

LIU was able to hang with its Pac-12 Conference foe for nearly a half, but the Utes’ size and depth became too much in the second half. Utah came out of halftime with a 12-0 run that upped its lead to 26 points and kept pouring it on until it owned a 40-point advantage on Jaxon Brenchly’s driving layup with 5:16 left.

The Sharks made only 32.2 percent of their shots and coughed up 17 turnovers that led to 17 Utes points.

Utah set a quick tone by rattling off the first eight points and forcing Strickland to burn a timeout before his team scored a point. In fact, LIU failed to get on the board for the game’s first 4:29, finally doing so via Marko Maletic’s 3-pointer.

Exacte canned a 3-pointer at the 7:55 mark of the half to give the Utes a 27-11 lead. At that point, the Sharks made their best run of the game, ripping off 11 consecutive points to pull within 29-24 on CJ Delancy’s putback with 3:52 remaining.

However, Utah finally started pulling away. Madsen accounted for a 3-pointer and two foul shots in a 7-0 burst that pushed the margin back to 12 points. He made two more free throws in the last minute for a 42-28 lead at halftime.