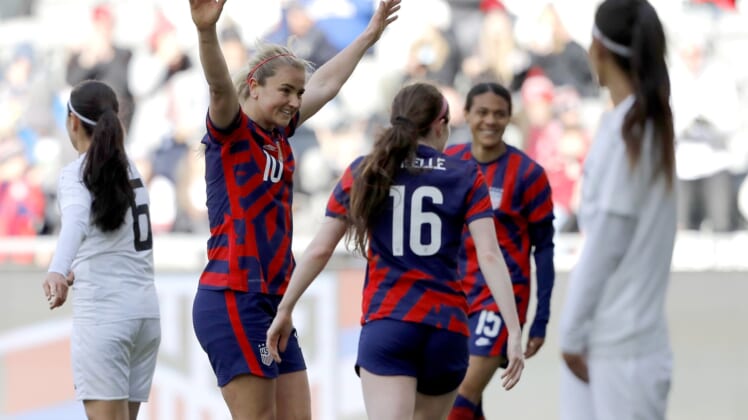 Despite the rout, the U.S. allowed a home goal for the first time in more than two years when Aziza Norboeva made it 7-1 to end the 17-match home shutout streak.

The world’s top-ranked team started slowly but goals less than a minute apart by Andi Sullivan (26th) and Mallory Pugh (27th) opened the floodgates for a 4-0 halftime lead.

Smith made it 3-0 in the 33rd minute and she added another two minutes later as the U.S. outshot the 48th-ranked team 13-0 in the first half. She got her third goal in the 56th minute. Smith has four goals in 14 international games.

The U.S. has 59 wins and seven ties during its home unbeaten streak.

Sullivan opened the scoring with her third goal in 26 matches off a header by Alana Cook. Directly off the kickoff, the U.S. pressured and Rose Lavelle started a counter with three other attackers, while Pugh finished her 22nd goal from the center of the box for the two-goal lead.
Pugh set up Smith for the third tally and on the fourth goal, Smith scored with a left-footed finish.

There was no letup to start the second half when Catarina Macario padded the advantage to 5-0 with strong shot from the right side in the 46th minute. She has seven goals in 16 games.

After Smith made it 6-0 from Pugh, Jaelin Howell scored her first goal before Uzbekistan got on the board. Ashley Hatch made it 8-1 in the 87th minute and Ashley Sanchez got her first career goal in the 90th minute.