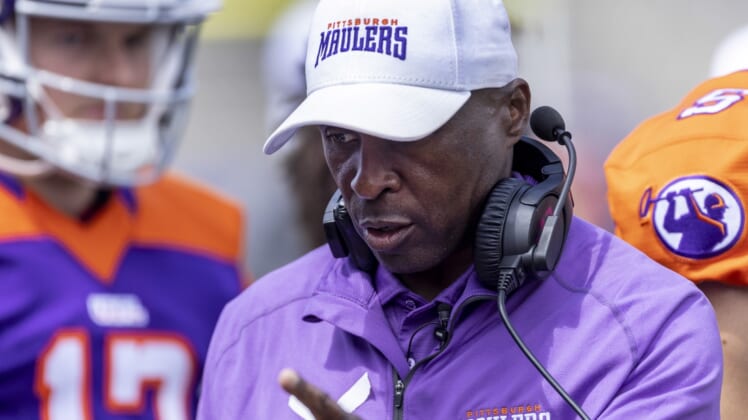 Vad Lee hit Bailey Gaither through double coverage for a 9-yard touchdown with four seconds remaining to hand the Pittsburgh Maulers a come-from-behind, 21-20 win over the Houston Gamblers on Sunday in Birmingham, Ala.

Pittsburgh trailed 17-9 after three quarters but cut the deficit to two with a 30-yard scoring hookup from Lee to Gaither with 6:26 to go. A two-point conversion attempt failed and Houston added a field goal before the Maulers’ game-winning drive.

Lee completed 19 of 32 passes for 170 yards with an interception, and Gaither hauled in eight receptions for 108 yards for the Maulers (1-4). Tre Walker added 92 yards on 10 catches.

Clayton Thorson completed 11 of 24 throws for 165 yards, a touchdown and a pick for the Gamblers (1-4). The quarterback added a rushing touchdown, while Mark Thompson gained a game-high 80 rushing yards on 17 carries for Houston.

J’Mar Smith went 17-for-22 passing for 203 yards and a touchdown and Birmingham used a strong defensive effort in the second half to defeat Philadelphia and remain the only unbeaten team in the USFL.

Smith replaced ineffective starting quarterback Alex McGough in the second quarter and connected with Marlon Williams for a 38-yard touchdown before the half. CJ Marable added 114 rushing yards and a touchdown on 23 carries.

The Stallions (5-0) trailed by three at the half but outscored the Stars 16-0 in the final two quarters. Birmingham forced three-and-outs on Philadelphia’s first two drives of the third quarter. On the first play of the Stars’ third drive, defensive end Seth Thomas recovered Matt Colburn II’s fumble.

Colburn and Paul Terry found the end zone on rushing touchdowns for the Stars (2-3).