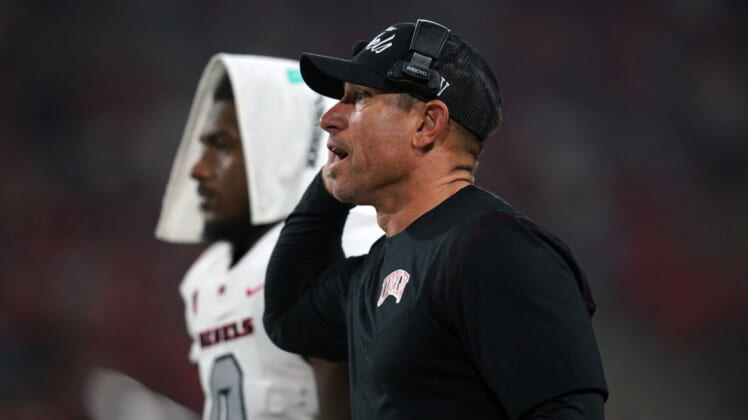 For just a few hours this past Saturday, UNLV had the longest losing streak in the FBS, with Arizona defeating UC Berkley earlier in the day.

The Rebels entered its Mountain West Conference game last week with 14 consecutive losses with their last win coming on Nov. 30, 2019, in an overtime victory on the road at Nevada-Reno.

Six days ago, UNLV went into Albuquerque, N.M. facing a program with multiple veteran coaches and a unique defensive scheme in addition to the New Mexico Lobos having two weeks to prepare.

However, the Rebels were prepared as they went from having seven penalties for 95 yards against Utah State on Oct. 16 to a mere one penalty for 15 yards in a 31-17 victory over New Mexico last week for Marcus Arroyo’s first win as a UNLV head coach.

As the clock reached triple zeros prior to the two head coaches meeting after the game, the players celebrated by giving Arroyo a Gatorade bath, in addition to celebrating in the locker room.

Not only did the Rebels commit just one flag, but they also recorded eight sacks against the Lobo offense.

In addition to this, senior running back Charles Williams became UNLV’s all-time leading rusher by recording 74 yards on 22 carries and two rushing touchdowns.

Both Williams and Arroyo were given the game ball, but both kindly rejected the ball for the program’s first win in almost two years.

Williams scored his first touchdown late in the first quarter, following a Lobo fumble at the 4-yard line by New Mexico quarterback Isaiah Chavez to even the score at seven points apiece.

Following UNLV’s first score, freshman quarterback Cameron Friel, who completed 20-of-33 passes for 227 yards, two touchdowns and an interception, found his rhythm as he threw both touchdowns passes on back-to-back offensive possessions, highlighted by a 75-yard airstrike to sophomore wide receiver Kyle Williams with 11:41 left in the second quarter.

Despite the win, there was still many things to learn for the Friel’s, who received the conference’s freshman of the week honors on Monday.

With a two-possession game for a large part in the fourth quarter, the 6-foot-3 play caller got to experience a four-minute offense to close a game for the first time in his collegiate career.

“That one that takes some time and understanding how you do it, where you snapped the ball, what the intent is, for everyone really,” Arroyo said of Friel in the four-minute offense. “That was an awesome opportunity there for him to work through that and it is a different situation. A lot of people think four minutes is really easy. You wait until the end of the (play) clock and snap the ball.

“Well, it’s not like that. You’re going to have a loaded box, there may be some run things you’ve got to do that are particular to that play to get extra guys blocked. I was excited for that opportunity to be in there. It wasn’t perfect and there was a lot of stuff he didn’t really understand.”

Hawaiian roots on both sidelines tomorrow for UNLV game at Allegiant

Now, Friel and seven of his teammates face off against their home state school and conference opponent, the University of Hawaii Rainbow Warriors tomorrow inside Allegiant Stadium at 1 p.m.

The Rebels and Warriors are facing off for the Island Showdown Trophy in Las Vegas, which is also called the “Ninth Island.”

Arroyo said the goal in growing the program is turn last week’s win into a two-game winning streak.

“We’re excited now to try to stack a win because now we get a chance to come home, play in our home stadium versus a team in our conference coming our way,” Arroyo said. “I’m excited about these guys’ work. They’ve been excited since we got back and they’re working hard.”

Warriors junior quarterback Chevan Cordeiro completed 19-of-34 passes for 175 yards and a touchdown against SDSU.

Arroyo said he can’t wait to see both teams that feature players and coaches from the Hawaiian Islands tomorrow afternoon.

“I’m sure there’s an inherent relationship based on where a lot of those people, a lot of those family are from, related and know a lot about each other, which makes for a great game,” Arroyo said. “I do love the fact that if there’s some excitement and some emotion about the buildup of a game between two games, that makes it fun.”