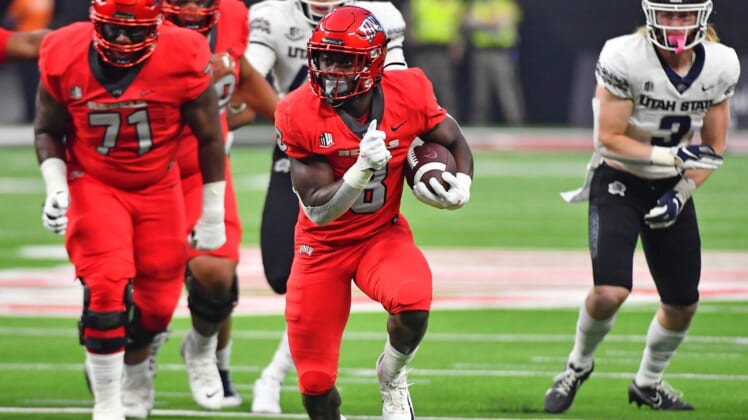 The UNLV football team is coming off a 28-24 loss to Utah State on Oct. 16, where they once again snatched defeat from the jaws of victory.

The Aggies scored an 11-yard touchdown with 35 seconds left to regain the lead as Rebels junior quarterback Justin Rodgers threw an interception on the ensuing drive to seal the win for Utah State.

Despite the loss, UNLV football head coach Marcus Arroyo said he saw improvement, especially in the energy and confidence aspects on Saturday.

“I thought guys competed all game again,” Arroyo told the media on Monday. “I’m seeing the resilience of our team be a constant and that’s a good fiber to have in our DNA. They’re staying together. I saw our sidelines engaged, everybody, cheering each other on the entire time, which is a big sign as to where we’re headed, even through the adversity.”

On the field, senior Charles Williams defined bell cow at the running back position by recording 27 carries for 221 yards and three touchdowns, highlighted by a 75-yard TD run to start the team’s second drive. He was the heart of UNLV football on the night — as he has been so often over his Rebels career.

“There were a bunch of explosive plays,” Arroyo said. “We ran the football really well, which is going to be something and our identity that we continue to harp on.”

In addition, UNLV football freshman quarterback Cameron Friel completed 11 of 21 passes for 107 yards with an interception before leaving late in the fourth quarter with a knee injury, which turned out to be tweaked.

In addition, freshman defensive back Cameron Oliver recorded four total tackles, a pass deflection and the team’s lone interception that would turn into a Rebels’ touchdown on the following drive.

“Defensively, the physical identity continues to be something that sticks out on tape,” Arroyo said. “Guys are flying around. The goal-line stops and the short-yardage stops are a big part of a culture, which is good to see.

“Havoc plays are our best of the season. Tackles for loss, pass breakups, forced fumbles – we need to force some recovery takeaways. We doubled our number there for our best game and I think that was a big piece of what we went into the game talking about.”

The growth of UNLV will get tested differently as they only get four days to prepare for their next opponent in the San José State Spartans.

Although the UNLV football continues their homestand, players will be challenged coming off a tough loss and trying to flush that with less preparation ahead of its next opponent.

“We put it to bed (Sunday) night; we’re running on very little sleep,” Arroyo said. “We had to turn this thing around. We got a full practice (Monday night). We moved it to (Monday’s) schedule to give us some hours in between the contest that we much need both for preparation and recovery.”

Coming to Allegiant Stadium on Thursday evening is a Spartans team that suffered a tough loss at home last week to then-No. 24 San Diego State on Friday night in a 19-13 double-overtime defeat where a touchdown was not scored until the first overtime period.

Arroyo said that UNLV football is beginning the second half of their schedule tomorrow, and the players have to learn from last week and be prepared to take on a veteran Spartans squad.

“There’s a lot of stuff that I think those guys understand we’ve got to do starting this week with a defending conference champion, San José State, who has a bunch of returning guys who have a really good team, well-coached, been there for a long time,” Arroyo said. “They started their process five years ago, too, is a very humbling way and they’ve got some believers.”

Penalties on both sides will be something to watch

One key thing to watch in tomorrow’s matchup will be the penalties.

Against San Diego State, the Spartans recorded 12 penalties for 101 yards, including some that either took points off the board or put San José State out of field goal range.

Arroyo said penalties are just one of the many things they look at when watching a film and how it affects a certain possession or ensuing moments after a flag is thrown.

“We sit down we watch it on Sundays as a team for about 45 to 50 clips that takes about 40 minutes where guys can understand that we’re all connected,” Arroyo said. “Substitutions, field positions, kick returns, penalties that lead to backed up kickoffs that change field positions, penalties that take away explosive plays and how those take shape.

“There’s a lot of things globally. I make sure that we as a program, from top to bottom, understand the totality of how they can change in the early phases of a program.”

The Spartans and UNLV football kick off Thursday at 8 p.m. The game will be televised on CBS Sports Network.