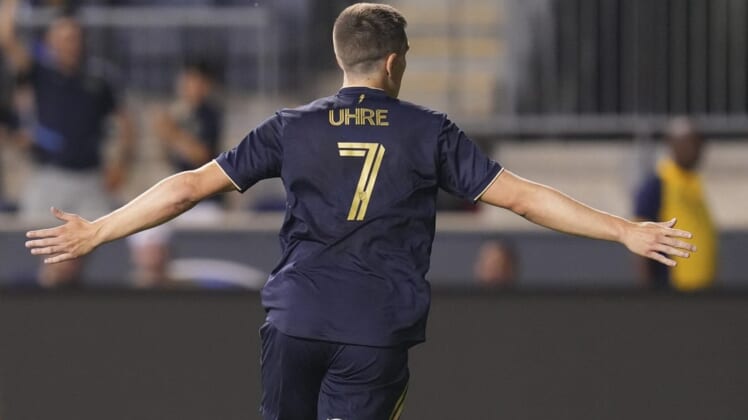 After a slow start offensively, the Philadelphia Union have recently been meeting their goals.

The Union (11-2-9, 42 points) look to extend a four-game win streak and five-game unbeaten run when they host the Houston Dynamo on Saturday.

The Union’s top three goal scorers – Mikael Uhre, Daniel Gazdag and Julian Carranza – have combined for 23 goals. That’s already a higher total than the top three scorers from last season at this point.

After their 1-0 victory last Saturday over Orlando City SC, the Union moved one point ahead of New York City FC and into the top spot of the Eastern Conference. The Union scored 11 goals in the three previous wins over D.C. United, Inter Miami CF and the New England Revolution.

“We don’t get too high or too low after wins or losses, but this is a good spot to be in,” Union head coach Jim Curtin said. “We really wanted to create some separation in the Eastern Conference. We talked about that and since I’ve talked about it, these guys have done nothing but reply and do what we asked of them.”

The Union are the only MLS team unbeaten at home with a 6-0-5 record. Philadelphia also is healthy heading into the game as Cory Burke and Jose Martinez returned this week.

The Dynamo have struggled for long stretches this season, but some major help could be on the way.

They signed 19-year-old Colombian forward Nelson Quinones on a one-year loan from Once Caldas S.A. with an option to purchase. It’s unclear if Quinones will be in the lineup on Saturday.

“We played right into the game they wanted us to play,” Dynamo head coach Paulo Nagamura said. “They brought it.”

Fafa Picault, a former member of the Union, scored the lone goal for the Dynamo in the 86th minute to avoid a shutout.

The Dynamo outshot Minnesota 22-9 overall and 4-3 in shots on goal, yet ended with another maddening loss.

“We gave up two goals that we probably shouldn’t, and we lacked urgency,” Picault said.

Houston will enter with a 3-7-0 record on the road.