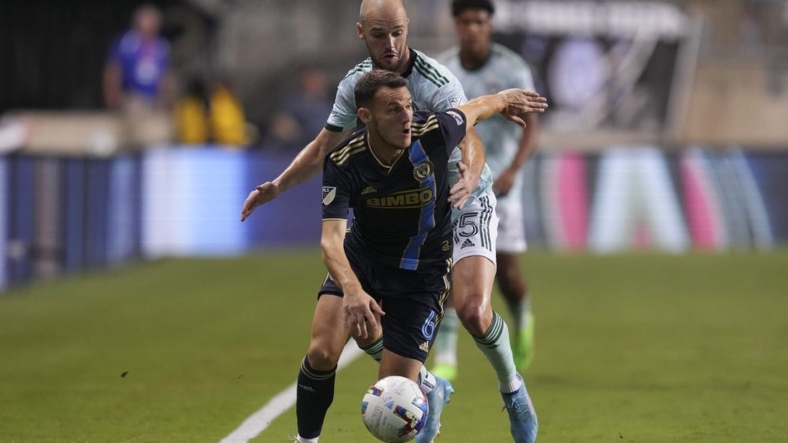 The Philadelphia Union can take the lead in the race for the Supporters’ Shield with best regular-season record in MLS Saturday night when they visit the New York Red Bulls.

The Union (16-4-9, 57 points) are even with LAFC, although Philadelphia has played one more game than Los Angeles. Already eight points clear in the battle for the top playoff seed in the Eastern Conference, winning the Shield would give the Union their second major trophy and a berth in next year’s CONCACAF Champions League.

“In the rest of the world, the Shield is the champion,” said Union manager Jim Curtin, alluding to the unusual playoff format leading to the MLS Cup championship. “So we put a lot of stock in trying to go for the Supporters’ Shield. It’s important for the fans, obviously, it shows that you were the best team through a 34-game grind with travel, with testing injuries, with national team call-ups.

“You were the best the entire year, so I think it means a ton.”

The Union have climbed to this perch by winning nine of their last 11 games, scoring at least four goals in six of those contests.

Daniel Gazdag leads Philadelphia with 17 goals, Julian Carranza has 14 and Mikael Uhre has 10. As a team, Philadelphia has scored 39 goals over those last 11 games after finding the net 22 times in their first 18. Their 61 goals lead the league.

The Union’s two defeats since June came on the road to Cincinnati and Dallas. The third-place Red Bulls (13-8-8, 47 points) are currently ahead of both those clubs in the race for points after back-to-back victories, 3-1 at home against Miami last weekend and 1-0 at second-place Montreal on Wednesday.

But New York has still just won four times in 14 home contests in an odd reversal of typical league trends, where home teams win about half the time.

The Red Bulls trailed early at home against Miami before seizing upon a 29th-minute red card to Alejandro Pozuelo to rally to a 3-1 win.

“I think the Miami game was huge for us to get that home win for our fans and for us,” said Red Bulls midfielder Daniel Edelman. “I think that was a really great win and I think that was a new start for us back at home and now we’re looking to continue that.”