UFC Vegas 55 results: Biggest winners and losers from May 21 card 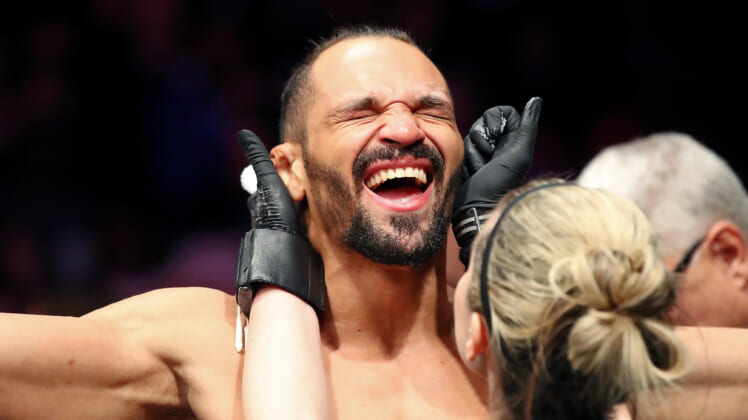 The UFC Vegas 55 results included several dominant performances and fighting ending finishes from inside the UFC APEX in Nevada.

In the main event, former bantamweight queen Holly Holm returned from a longer than expected hiatus to face a young gun star in Ketlen Vieira. Surprisingly, despite her corner giving the impression that she was losing the fight and needed a finish, the Brazilian was awarded a career-altering split-decision win over Holm.

Let’s take a look at the victorious fighters who had nights to remember, and the defeated foes who will look back on May 21 with frustration and regret.

While it wasn’t pretty and may be controversial in many observers’ eyes Vieira earned the biggest win of her career on Saturday night. She now has back-to-back wins over former bantamweight champions and is 7-2 overall in the UFC. “Fenomeno” could be in line for the winner of Julianna Pena vs Amanda Nunes in the fall.

UFC Vegas 55 was not a good night for Holly Holm. After a year and a half away from the sport she put forth a solid but nonetheless unimpressive performance against Ketlen Vieira. While she probably still did enough to get the nod, two of the three judges did not like what she was offering up and instead award the decision to her opponent. The defeat ends a two-fight win streak, and at 40, it may very well end her hopes of competing for UFC gold ever again.

While Michel Pereira’s win over Santiago Ponzinibbio was razor-thin and could have easily gone the Argentinian’s way, there is no doubt the Brazilian scored a monumental victory at UFC Vegas 55. He has won five straight and has a couple of impressive names on his recent hit list. Pereira called for a bout with BMF champ Jorge Masvidal next. While unlikely, that would be an excellent matchup for each based on the current place their careers are in.

It seemed like Santiago Ponzinibbio did enough to get the win against Michel Pereira. But alas, two of the three judges saw things differently. Since returning after missing two and a half years with various health issues, he has lost three of four — two by split-decision — and is now at a bit of a career crossroads at 35. Can he rebuild himself to the contender he once was in 2018?

It took Chidi Njokuani 15 years to finally reach the UFC, and he is making the most of his run thus far. In the Octagon — including in his 2021 “Dana White’s Contender Series” bout — “Chidi Bang Bang” has three straight knockout wins. The best yet came in his UFC Vegas 55 results when he absolutely obliterated Dusko Todorovic with a nasty elbow that put his foe to sleep. It’s hard to say if Njokuani can be a contender at middleweight, but on Saturday he showed he’s deserving of a big name foe next.

Eryk Anders might have good reason to be a little PO’d after Saturday night. While his bout with Jun Yong Park was ugly at times and neither man swayed the momentum definitively in their direction, a case could be made he won the bout after scoring three takedowns. However, with Park landing far more strikes, the fighter known for his power-punching prowess may look back at this event and wonder why he didn’t use his bread-and-butter more instead of trying to be an uncharacteristic grappler throughout.

After a disappointing performance in his June 2021 loss to Steve Pederson, Chase Hooper really needed an Octagon victory. He had lost two of three heading into UFC Vegas 55 and some of the hype surrounding him seemed diminished. On Saturday afternoon he showed he didn’t waste the near year away and offered up an improved game in his decisive third-round technical knockout win over Felipe Colares. He still has more work to do to round out his striking, but getting back in the win column was necessary to build some new momentum.

After coming up short in his UFC debut in August 2020, to talented prospect Chris Daukaus, Parker Porter got on a roll winning three straight in the Octagon. However, his UFC Vegas 55 results saw a complete derailing of his hard-earned momentum. In less than a round, Jailton Almeida proved why he was a massive favorite and forced Porter to tap out with less than 30 seconds left in the opening round. The defeat shows that there are various levels in this sport, and the Connecticut native still needs to make more improvements before he can be thought of as a contender.