UFC Vegas 54 results: Winners and losers from May 14 UFC card 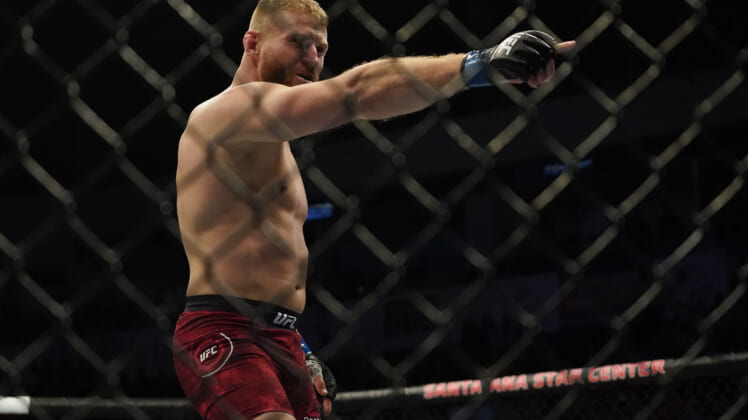 The UFC Vegas 54 results on May 14 featured some entertaining fight-ending violence from inside the UFC APEX in Las Vegas, Nevada.

The event was headlined by a major matchup in the promotion’s light heavyweight division when former division king Jan Blachowicz made his return to the Octagon for the first time since losing the title in October, to face third-ranked fighter Aleksandar Rakic. In the end, a blown-out knee from Rakic handed Blachowicz the victory in a highly competitive battle.

The co-main event also featured a couple of talented 205-pound fighters in Ion Cutelaba and Ryan Spann. A pair of fighters with 30 finishes in their 35 combined wins. In addition, the card saw the return of quite a few Octagon veterans like Katlyn Chookagian, Amanda Ribas, Davey Grant, Michael Johnson, and Angela Lee.

Let’s take a look at the biggest winners and losers from this latest UFC Fight Night card in Las Vegas.

It wasn’t the way Jan Blachowicz wanted to win but he will certainly take it. Aleksandar Rakic blowing out his knee was unfortunate for the 30-year-old, however, the former champion looked very good in the fight and the bout was likely even until the third-round injury. Assuming no one suffers a major injury in the June title fight between Glover Teixeira and Jiri Prochazka, Blachowicz likely could be competing for the gold he lost later this year.

The UFC Vegas 54 results for Aleksandar Rakic are heartbreaking. After two rounds, at worst, his bout with Jan Blachowicz was tied at 19-19. The fight was highly competitive and the speed and athleticism of the Austrian were certainly a problem for the former champion. However, midway through the third “Rocket” blew out his knee and brought an immediate end to the fight. The loss shouldn’t hurt Rakic’s standing in the division but will be a major setback in time as he recovers from a serious knee injury.

After a UFC hot streak that saw him win three-straight, Englishman Davey Grant entered Saturday night on his second UFC losing skid. He ended that in a wild and exciting melee against Louis Smolka. For a fighter long known for his grappling, Grant’s latest KO win has furthered his recent reputation as an action fighter looking to engage in a scrap with any and all comers. He will never compete for the bantamweight title, but you can bet on “Dangerous” bringing entertainment every time he steps inside the Octagon.

Manuel Torres had one heck of a UFC debut. The “Dana White’s Contender Series” contract winner got a hard-hitting veteran with a bunch of experience in his first bout in the Octagon on Saturday. He handled the pressure of his foe, was the faster and more accurate fighter, and landed power strikes with consistency. He quickly wore down Frank Camacho over the first four minutes and eventually landed a right hook that dropped “Crank” and forced the referee to mercifully end the action. It was all the more impressive since “El Loco” has built his career on his grappling skills. Well, he definitely can strike too.

Amanda Ribas’ UFC Vegas 54 results will be a hard pill for her to swallow on Sunday morning. While she did some positive things in her flyweight debut by scoring several takedowns and putting her heart into trying to pull out the third round, she still came up short against Katlyn Chookagian. After winning her first four in the UFC she has now lost two of her last three. However, considering she lost by split decision to an elite fighter at 125-pounds, there is certainly upside to Ribas in her new weight class.

Michael Johnson’s UFC career was likely on the line at UFC Vegas 54. In the most important moment of a long career, the 35-year-old delivered in a way that will likely extend his Octagon run by a couple more fights. With his nasty knockout of Alan Partick he proved once again that while he has never been a serious title contender, he remains one of the promotion’s more reliable competitors for exciting fights.

Angela Hill is a fighter with a solid fan base and a reputation as a talented fighter with a likable personality. However, her future in the Octagon is completely up in the air after UFC Vegas 54. Certainly, she has been on the wrong side of some questionable split-decision losses, but after her defeat to Virna Jandiroba on Saturday, she has lost three straight and five of her last six. And this defeat was not disputable. If she gets another opportunity, “Overkill” will be in a win or be cut scenario.