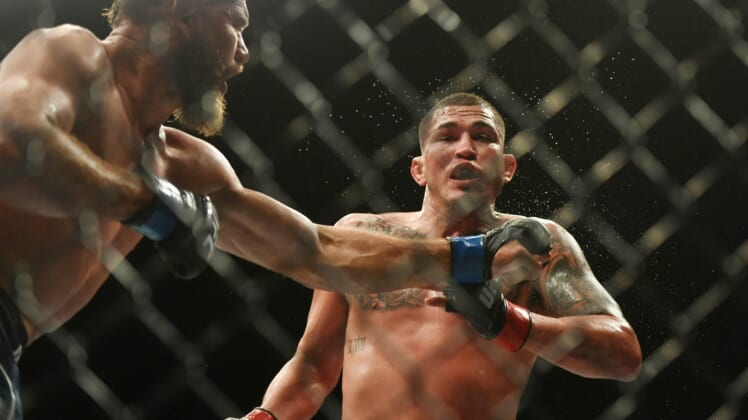 UFC 249 is here, and we will be updating you throughout the evening with full coverage of tonight’s exciting fights from start to finish on Sportsnaut.

The event takes place at VyStar Veterans Memorial Arena in Jacksonville, Fla. The main card airs on pay-per-view following prelims on ESPN and ESPN+. The preliminary card featured three exciting fights that is highlighted by Donald “Cowboy” Cerrone vs Anthony Showtime” Pettis. So, let us look at the results of the preliminary card of UFC 249.

Unfortunately, there was not much to note on this fight. Esparza’s style seems to always lead to very boring fights and this was no different. Waterson held the edge on the feet as expected and was able to maintain a solid pace throughout the fight.  It was a close fight, but Waterson used crisper striking and fought at range to avoid the take downs of the former champion.

Neither fighter in this contest has any claim to contender status whatsoever. While I do not agree with the judge’s decision, there was no clear and decisive winner in this fight. Waterson and Esparza are gatekeepers for a very lackluster strawweight division and proved they are not a top tier fighter worthy of contender status.

Aleksei Oleinik put on a striking clinic against the former UFC Heavyweight Champion Fabricio Werdum.  Coming back from a two-year layoff, Werdum looked old, out of shape, and confused against the superior striker early on. Oleinik seemed to fade mid-way in Round 2 but had a second wind and was able to escape a ground attack by Werdum late in the round.

Round 3 opened with Werdum taking down his opponent with ease and he spent much of the round using his superior grappling and submission skills against an overmatched Oleinik. The judges decided in favor of Aleksei Oleinik via split decision earning him his biggest career win in the UFC.

Was it ring rust or poor conditioning that cost Fabricio Werdum this fight? The former champion looked in awful shape and time is not on his side for another chance at the heavyweight title. This was a great win for Oleinik and he looked solid early on in the fight until he tired in the second round. Once his conditioning was gone, Oleinik was slow and lost. Oleinik would get destroyed against a younger elite heavyweight contender and he showed no signs of being a legit unless he fixes his conditioning.

“Cowboy” Cerrone looked very determined and mad right from the start. Both fighters traded hard punches and kicks and displayed great stand-up skills throughout the fight. Pettis displayed crisper striking and hard strikes and was moving forward throughout the fight which stumped Cerrone at times.

Surprisingly, Cerrone utilized his wrestling and was able to takedown “Showtime” easily but he was unable to hold Pettis down for more than 15 seconds. Cerrone sustained an eye poke late in the third round that the referee missed. Pettis attacked hard but Cerrone was motivated and  turned up his attack and stunned Pettis  near the end of the fight. It was to little to late and the power of Pettis and his consistent attack on Cerrone secured a close decision victory.

This was a close fight and could have gone either way on the judge’s scorecard. This fight was fun at times but a little underwhelming regarding the expectations I had for this fight. Pettis is a much more concise striker and hits with extreme power when he lands. Cerrone will always be a fun and tough fighter but lacks the power in his strikes to be a contender at this stage of his career. Either way, both fighters will always have a place on any UFC card as they bring fun and exciting fights every time they fight on a consistent basis.