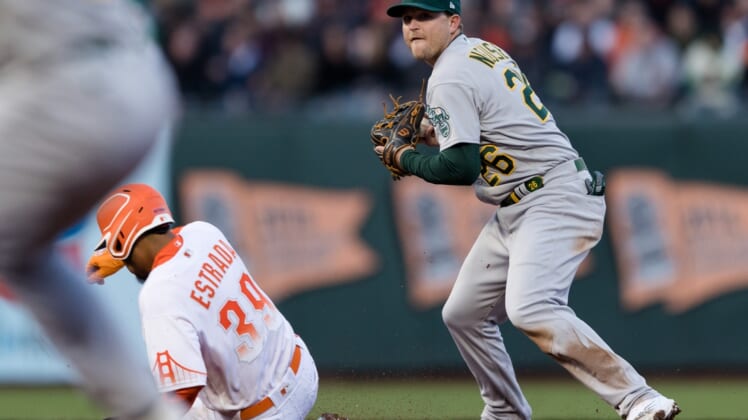 Wilmer Flores and Austin Slater backed the nine-strikeout pitching of Carlos Rodon with three-run home runs on Tuesday, sending the San Francisco Giants to an 8-2 victory over the visiting Oakland Athletics in the opener of a two-game interleague series.

Rodon (3-0) continued his strikeout assault by fanning eight or more for the fourth straight start.

The first-year Giant also held an opponent to one run or none for the fourth consecutive time, limiting the A’s to one run on three hits and two walks in six innings.

Flores hit an RBI double in a two-run second inning and then added his second home run of the season, a three-run blast in the third after Oakland had pulled within 2-1.

On both occasions, Brandon Crawford walked in front of Flores and scored on the latter’s hit.

A’s starter Daulton Jefferies (1-3) was pulled after four innings, having allowed five runs and four hits. He walked two and struck out three.

Oakland kept within arm’s length on an RBI double by Seth Brown in the seventh. But again the Giants responded immediately in the last half of the inning, with Slater following a single by Thairo Estrada and a walk to Jason Vosler with his three-run shot, also his second of the season.

Estrada had the Giants’ other RBI with a second-inning infield out.

Brandon Belt had two hits for the Giants, who packed plenty of pop despite having had to add an 11th game to their just completed road trip with a one-game stopover in Milwaukee on Monday.

San Francisco prevailed in that contest 4-2 and has now won five in a row.

Sheldon Neuse had two singles and an RBI for the A’s, who were out-hit 7-5. Oakland has lost three of its past four games.