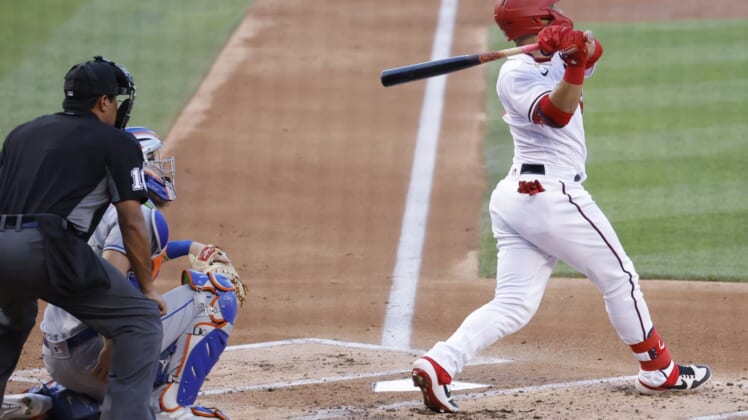 Kyle Schwarber continued his power surge by belting two of Washington’s five home runs as the Nationals earned a 8-4 victory over the visiting New York Mets on Monday night.

Schwarber has hit 11 homers over the past nine games. The only other player since 1901 to hit 11 home runs in a nine-game span was Frank Howard of the 1968 Washington Senators.

Trea Turner and Gerardo Parra clubbed solo shots and Ryan Zimmerman broke open a 5-4 game with a three-run blast in the eighth for the Nationals, who have won 12 of the past 15 to move within three games of first-place New York in the National League East.

Paolo Espino (2-2) allowed five hits and struck out three without a walk over five scoreless innings during a spot start for Washington.

Down 5-0, the Mets made things interesting late. Jeff McNeil (two hits) had an RBI single in the seventh. In the eighth, Pete Alonso (two hits) hit a two-run homer that was immediately followed by Billy McKinney’s solo drive to make it a one-run game. However, Zimmerman’s homer off Miguel Castro provided some insurance and sent New York to its ninth loss in 14 games.

Three Jerad Eickhoff pitches into the bottom of the first, Washington had a 2-0 lead. Schwarber (three hits) knocked a tape-measure blast into the third deck, just inside the right field foul pole, and Turner (two hits) followed with a first-pitch shot over the left field wall. 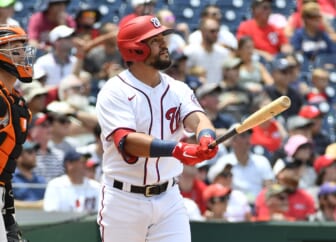 Also Read:
Kyle Schwarber is homering the Washington Nationals back to life

Schwarber, who cranked another solo shot to the right field seats in the fifth, has 24 home runs on the season. He has gone deep seven times in his past three games against the Mets.

Parra’s blast in the second was Washington’s third homer from the first seven batters to face Eickhoff, who did not allow a run in four innings of his 2021 debut on June 21. On Monday, Eickhoff (0-1) yielded those four solo homers, plus Starlin Castro’s RBI single, and eight hits over six-plus innings. He walked one and struck out three.

The game was the makeup of the April 3 contest between the teams that was postponed due to COVID-19.