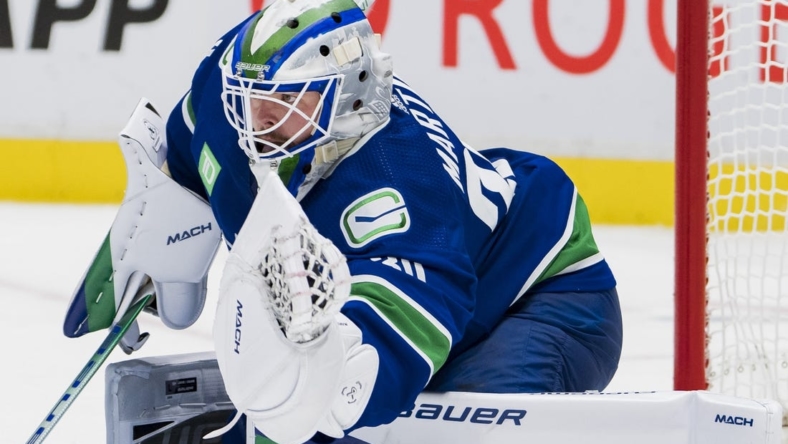 Bo Horvat scored two goals and Elias Pettersson had a goal and an assist to lead the visiting Vancouver Canucks to a 6-4 win over the Ottawa Senators on Tuesday.

While Horvat extended his team-leading goal total to 12, Ilya Mikheyev, Brock Boeser and Jack Studnicka also scored for Vancouver, which won for the second time in three games.

Quinn Hughes and Pettersson each recorded their team-high 11th assist of the season for the Canucks. Ethan Bear and Jack Rathbone each tallied their first assist of the year, while Conor Garland notched his fourth assist and Oliver Ekman-Larsson and J.T. Miller each added their sixth helper of the season.

Garland helped break a 2-2 tie early in the third period by stealing the puck from Harmonic behind Ottawa’s goal and sliding a pass across the goalmouth, where Horvat swatted it past Talbot with 18:44 left in the game.

Boeser scored his first goal of the season when he deflected Ekman-Larsson’s shot past Talbot for a 4-2 lead with 11:42 remaining.

After Stutzle tied the game off DeBrincat’s assist with 5:57 left in the game, Vancouver extended the lead to 5-3 on Studnicka’s first goal of the season with 5:01 remaining.

Giroux’s power-play goal off an assist trimmed it to 5-4 before Pettersson’s empty-net goal with 45 seconds left capped the scoring.

Batherson gave Ottawa a 1-0 lead just 50 seconds into the game when he scored off assists from DeBrincat and Bernard-Docker.

Vancouver equalized when Rathbone slid a cross-ice pass to Bear who unleashed a slapshot that hit Horvat and dropped to his stick, allowing Horvat to backhand a shot past Talbot with 53 seconds left in the period.

Ottawa responded just 16 seconds later, when Stutzle slid a pass to Hamonic, who ripped a slapshot underneath Martin’s arm for a 2-1 lead with 37 seconds left in the period.

The Canucks tied the game when Mikheyev scored at the 13:50 mark of the second period, with Hughes and Pettersson assisting.