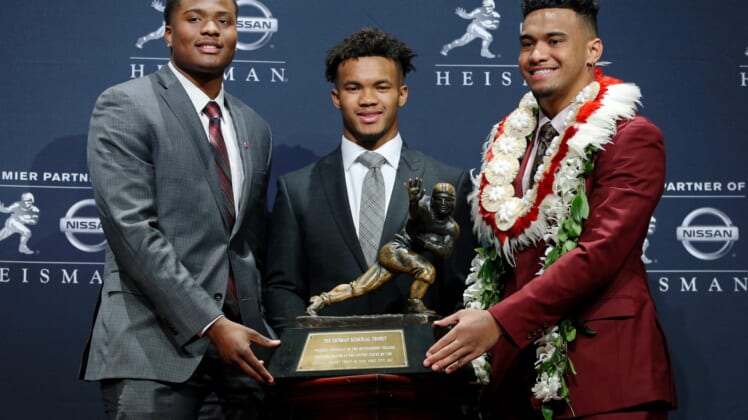 After a phenomenal season for all three Heisman Trophy finalists, Kyler Murray beat out Tua Tagovailoa and Dwayne Haskins for the 2018 Heisman Trophy.

Oklahoma is the first school to have back-to-back #HeismanTrophy winners since USC's Matt Leinart in 2004 and [Vacated] in 2005.

The vote for this year’s award was tight between Tagovailoa and Murray, with Murray beating out his counterpart by 296 points.

Murray led Oklahoma to a 12-1 record, good enough for the No. 4 seed and a berth to the College Football Playoff semifinal against Tagovailoa’s Crimson Tide. He was incredible this year both as a passer and rusher, going for a combined 4,945 yards and 51 touchdowns while regularly pulling off feats of greatness like this.

His final-game performance against Texas, combined with Tagovailoa’s poor outing against Georgia, likely tipped the scales in his favor.

Tagovailoa led ‘Bama to a perfect 13-0 record this year, though the final win was clearly more due to his backup, Jalen Hurts, than what he did in the SEC Championship Game against Georgia. On the season, the sophomore threw for 3,353 yards, 37 touchdowns and four interceptions. Tagovailoa kept our jaws on the floor with incredible pin-point passes like this one. He also rushed for four additional scores, and his stats were amazing considering he barely played in the fourth quarter of any game this season.

Haskins was the most prolific pure passer of the bunch. He led Ohio State to a 12-1 record but had some rough patches during the season and was unable to lead the Buckeyes into the playoff. He did, however, set Big Ten single-season records for passing yards (4,580), passing touchdowns (47), total yards (4,702) and total touchdowns (48).

After Murray was announced as the winner Saturday night in New York, Twitter exploded with reactions.

Kyler Murray is a top 10 MLB Draft pick and a Heisman winner. Wild.

Knew it was going to be Kyler Murray as soon as the announcer couldn’t pronounce Tua’s name! #HeismanTrophy

Well deserved, no do your thing and go play some ball @TheKylerMurray https://t.co/YvNxSy8RIe

Kyler Murray won the #Heisman – totally deserved it, love watching him interact with the other heismans

Can't be mad at Kyler Murray winning. After Tua got hurt, his performance did get noticably worse. Kyler was consistent all season. You got it next year, Tua. #RollTide#Heisman

I feel bad for Kyler Murray when December 29th rolls around. He’s gonna get embarrassed. Tua will put up insane numbers.

Boomer Sooner as Kyler Murray becomes the 2018 Heisman Trophy Winner!! No one deserves it more as he played at such an elite level this year. Got the hardware now go get the title. Go Sooners!!!