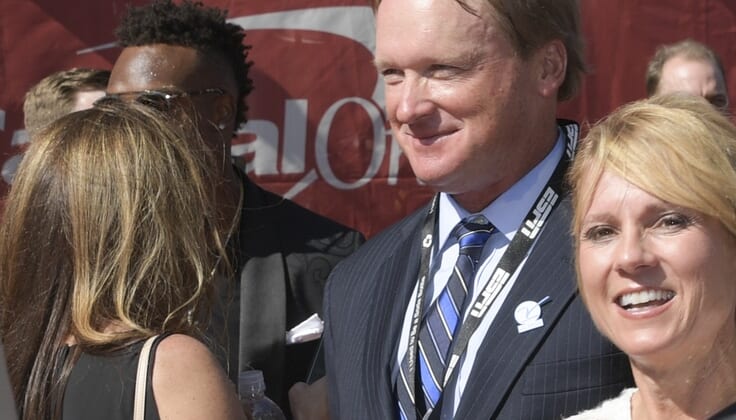 On Friday, news broke that the Oakland Raiders are set to announce Jon Gruden as their next head coach on Tuesday and that he’ll land a 10-year deal worth $100 million.

That kind of news predictably had social media in a frenzy. Twitter users had some great reactions to the madness, and we decided to share the ones that grabbed our eyes.

Easy to pay a coach when you’re getting $750M in free money for a stadium.

Hey Jay Gruden can you comment on your brothers new contract with the raiders ?… pic.twitter.com/UTPBp5WAUE

Shout out Gruden for flipping one Super Bowl win into a lucrative job with the media that allowed him to develop the cult of personality that he then flipped into this absolutely absurd deal. https://t.co/49r3IFIMfB

if Bill Belichick isn’t getting paid $100 million, there’s no way any other Coach in the sport should be paid that amount.. Gruden hasn’t won 100 games yet, but getting a $100 million dollar contract. Salute. pic.twitter.com/BuJcwcn8kG

I’m going to laugh so hard when this 10 year deal backfires in 3 years. Good for Gruden tho. He really finessed them. pic.twitter.com/XnUW7ecATa

Raiders: How much would it cost to get you to leave Monday Night Football

Gruden: I'm telling ya man, I love it here man I wouldn't leave for 100 million dollars

He's back!!! @TravMcMillan Jon Gruden returns to the Raiders. pic.twitter.com/3NWYwNr3hd