On Saturday, the Alabama men’s basketball team saw its entire bench ejected at the same time after a couple of fights broke out against Minnesota. 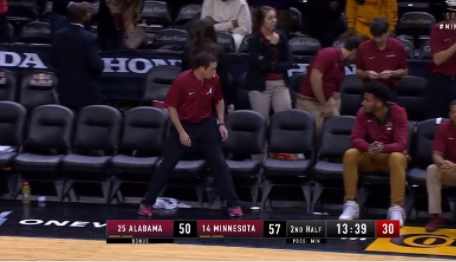 Alabama’s entire bench ejected. Automatic after they all left bench during fight. Crimson Tide with five guys for the rest of the game.

This is the Alabama bench right now. pic.twitter.com/7u52Ts1RIp

Then, not long afterwards, one of ‘Bama’s starters fouled out, leaving the Crimson Tide with just four players.

The reactions on social media to this were priceless, especially because Auburn was beating Alabama in the Iron Bowl at the same time.

Alabama football down 12 with 3 minutes left

Alabama basketball’s entire bench ejected against Minnesota and they’re playing the second half with 4 players.

In other Bama news their entire basketball 🏀 team just got ejected. At least one sport is showing some life. 😂

This tweet is aging well.
Football: Down 12 with 3 minutes left.
Basketball: Down 11 with 11 minutes left and their entire bench just got ejected from the game. https://t.co/fnTWV6plqH

Alabama basketball playing with 4 players after their entire bench got ejected for coming on to the floor during a scuffle and now another player just fouled out!😂

The entire bench of Alabama got ejected and a player just fouled out!! They only have 4 players hahaha https://t.co/0cHkJl4Wmp