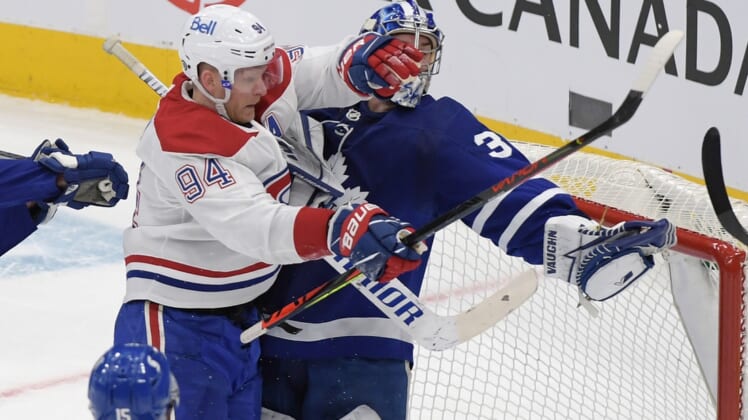 May 8, 2021; Toronto, Ontario, CAN; Toronto Maple Leafs goalie Jack Campbell (36) holds the puck in his glove as he is bodychecked by Montreal Canadiens forward Corey Perry (94) in the first period at Scotiabank Arena. Mandatory Credit: Dan Hamilton-USA TODAY Sports

The Toronto Maple Leafs overcame a 2-0 deficit with three straight second-period goals and went on to defeat the visiting Montreal Canadiens 3-2 on Saturday night.

The Maple Leafs won the final two regular-season games between the teams to take the season series 7-2-1.

Pierre Engvall, William Nylander and Mitchell Marner scored for the Maple Leafs (35-13-6, 76 points), who clinched first place in the North Division with the victory.

Jake Allen made 23 saves for Montreal and Jack Campbell stopped 21 shots for Toronto.

Kulak gave Montreal the lead at 3:34 of the first period with a fluttering 50-foot shot that found its way through a cluster of players and bounced in off the arm of Toronto defenseman Jake Muzzin. Alex Belzile earned the assist on Kulak’s second goal of the season.

The Canadiens took a 2-0 lead 31 seconds into the second period. Suzuki finished a two-on-one rush with a knuckling shot from the right circle that squirted under Campbell’s arm for his 13th goal of the season. Tyler Toffoli and Jeff Petry earned assists.

Toronto answered with three consecutive goals to finish the second period with a 3-2 lead.

Engvall scored his sixth goal of the season at 5:02. He circled from behind the net and out to the high slot before shooting, giving him goals in three consecutive games. Jason Spezza and Justin Holl had the assists.

The Maple Leafs tied the game at 13:36 on Nylander’s 17th goal of the season. Muzzin passed to John Tavares, who tipped the puck to Nylander, who then swept it past Allen.

Toronto took the lead at 3-2 on Marner’s 20th goal at 16:33. He shot from the left circle after Auston Matthews won the faceoff.

Montreal had a 17-14 edge in shots on goal after two periods.

Montreal could not take advantage of a power play when Nylander took a tripping penalty at 3:56 of the third period.