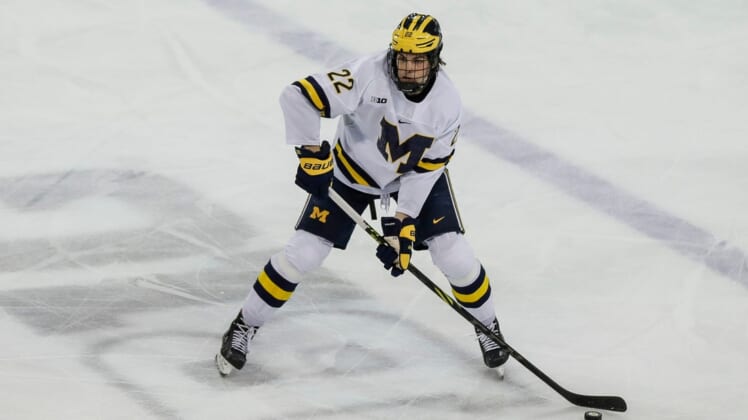 Defenseman Owen Power skated with the Buffalo Sabres for the first time on Sunday, two days after he signed a three-year, entry-level contract.

Power, the top overall pick of the 2021 NHL Draft, will need a few days to get his feet wet before playing an NHL game, Sabres coach Don Granato said.

“We’re all excited to move forward. We see this team progressing. And we see him as a big part of that progression,” Granato said, per The Buffalo News. “He’s finally here and give him a couple days to acclimate with new teammates and how we operate around here before he gets his first game.”

The Sabres (26-36-11, 63 points), who have nine games remaining in the season, visit the Tampa Bay Lightning on Sunday before playing at the Toronto Maple Leafs on Tuesday. Power was born in the Toronto suburb of Mississauga, Ontario.

25’s first skate as a Sabre is underway. #LetsGoBuffalo pic.twitter.com/pIxiriIT0I

Power, 19, recorded 32 points (three goals, 29 assists) in 33 games with Michigan this season. The Wolverines saw their season end Thursday with a 3-2 overtime loss to the University of Denver in the Frozen Four.

He also netted a hat trick for Team Canada at the world juniors held last December, and went on to represent his country at the 2022 Winter Olympics in Beijing.