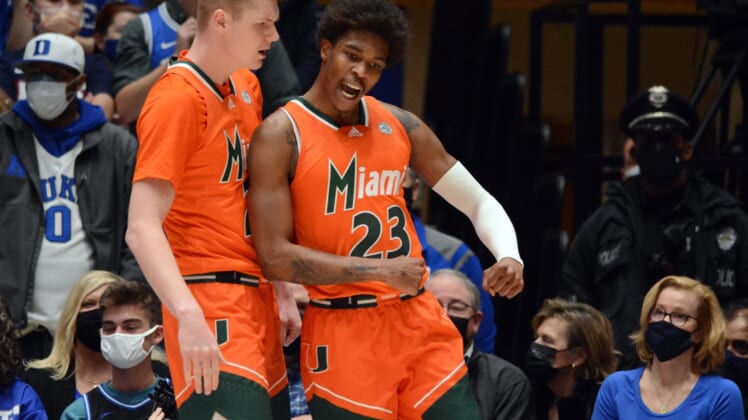 Miami scored the last five points in the final 34 seconds to stun No. 2 Duke 76-74 on Saturday night in Durham, N.C.

Kameron McGusty’s basket following teammate Jordan Miller’s offensive rebound provided what became the winning points with 20 seconds left. Duke launched two 3-point shots in the waning seconds, but both were off the mark. It was a matchup of unbeaten teams in ACC play.

Paolo Banchero led Duke (12-2, 2-1) with 20 points, while Wendell Moore Jr. and Mark Williams both had 12 points, and A.J. Griffin posted 10 points. The Blue Devils lost at home for the first time this season.

Adam Flagler poured in 22 points and James Akinjo had 20 points and eight assists as the top-ranked Bears overcame the host Horned Frogs at Fort Worth, Texas.

LJ Cryer added 15 points off the bench as the Bears extended their winning streak to 21 games dating to last season’s national-title run. Flagler made six of his 10 attempts from 3-point range. That was part of the Bears’ 13-for-27 shooting on 3-pointers as they ended up at 52.6 percent overall from the field.

Mike Miles, who hadn’t played a game in 21 days, had 22 of TCU’s first 44 points and racked up 26 points. Chuck O’Bannon had 12 points and Damion Baugh notched 10 points for TCU, which finally played its Big 12 opener after having three games either postponed or canceled since last playing Dec. 21.

Trevion Williams scored 21 points and grabbed nine rebounds as the Boilermakers battled the pesky Nittany Lions down the stretch before emerging with a road victory at University Park, Pa.

Mason Gillis pitched in a career-high 14 points for Purdue, which also received 13 points from Sasha Stefanovic and 12 points from Jaden Ivey. Purdue has won 12 of the past 13 matchups in the series.

Jalen Pickett registered 21 points and 10 assists to lead Penn State, which took the lead after trailing by 13 in the second half. However, the Nittany Lions did not score over the final two minutes as their mini two-game winning streak came to an end.

Anton Watson scored 19 points and the host Bulldogs showed no rust after an 11-day layoff while rolling to a victory over the Waves in West Coast Conference play at Spokane, Wash.

Tyger Campbell scored 17 points and Jaime Jaquez Jr. added 14 as the Bruins held the host Bears to just 1-for-14 shooting from 3-point range to win a defensive struggle in Berkeley, Calif.

The Bruins (10-1, 2-0 Pac-12) — playing their first league game since Dec. 1 and first conference road game this season — did not give up a made 3-pointer throughout the second half.

UCLA also forced Cal (9-7, 2-3) into 15 turnovers, which the Bruins converted into 17 points, helping to overcome the team’s lowest-scoring performance of the season. Campbell and Jaquez buoyed the Bruins through the night, starting early. They combined for 21 of UCLA’s 31 first-half points.

Bryson Williams recorded 22 points and eight rebounds as the Red Raiders controlled the tempo and smothered the Jayhawks at Lubbock, Texas.

Texas Tech forced 17 turnovers and did enough to solve a 2-3 zone Kansas employed in the second half while snapping the Jayhawks’ eight-game winning streak. Down the stretch, Texas Tech went 6-for-6 at the foul line in the final 1:40 to seal the outcome while converting vital steals by Marcus Santos-Silva and Davion Warren.

K.D. Johnson hit for 23 points as the Tigers used a late-game run to hold off visiting the Gators to win their 11th consecutive game.

The Tigers (14-1, 3-0 SEC) led by nine points at halftime but were up just 60-59 after a 3-pointer by Florida’s Anthony Duruji with 8:37 to play. Auburn then took control via a 13-4 run capped by a 30-foot 3-pointer from Wendell Green Jr. with 3:57 remaining. The Tigers were never seriously challenged again.

Jaylin Williams scored a season-high 14 points, and Jabari Smith and Green added 13 points each for the Tigers. Colin Castleton led Florida with 22 points and 10 rebounds. Duruji scored 14 points, Myreon Jones had 13 and Tyree Appleby added 11 points for the Gators (9-5, 0-2), who dropped their second straight game.

Umoja Gibson scored 20 points — 14 in the second half — to lead the host Sooners over the Cyclones in Norman, Okla.

Josh Carlton recorded a double-double with 22 points and 12 rebounds, and Jamal Shead converted a timely steal into a layup as the 12th-ranked Cougars beat the visiting Shockers.

Taze Moore added 17 points and six rebounds for the Cougars, while Fabian White Jr. (15 points) and Shead (10 points, seven assists and four rebounds) helped round out another balanced attack.

Tyson Etienne led the Shockers with 11 points, while Dexter Dennis chipped in 10. Wichita State never led and surrendered 26 points off turnovers while shooting 40.4 percent from the floor, including 6 of 23 on 3-pointers.

Keylan Boone poured in a career-high 17 points, including two key 3-pointers down the stretch, as the Cowboys defeated the visiting Longhorns in Big 12 Conference play in Stillwater, Okla.

The Cowboys (8-5, 1-1 Big 12) never trailed, led by two points at halftime and by seven after a 3-pointer by Boone with 2:41 to play. Oklahoma State then added to its advantage with two free throws by Bryce Williams with 2:04 left before Boone all but cemented the victory with another jumper from beyond the arc with 1:27 remaining.

Timmy Allen and Andrew Jones led Texas (12-3, 2-1) with 10 points each. The Longhorns played without Tre Mitchell, their third-leading scorer, who was held out because of COVID health and safety protocol.

Kobe Brown scored a career-high 30 points and grabbed 13 rebounds to lift the host Tigers to an upset over the Crimson Tide in Columbia, Mo.

Jarron Coleman scored 18 points and Javon Pickett and DaJuan Gordon each added 15 as the Tigers (7-7, 1-1 Southeastern Conference) won their third straight game against the Crimson Tide. Missouri coach Cuonzo Martin returned to the bench after missing the team’s 83-56 loss at Kentucky while sidelined by the virus.

Nate Watson scored 18 of his 22 points in the second half as the Friars remained unbeaten at home with a victory over the Red Storm.

Watson was in foul trouble in the first half but came alive in the second when Providence shot 59.3 percent, outscored St. John’s 48-35 and improved its home record to 10-0. Jared Bynum added a season-high 18 points as Providence gave coach Ed Cooley his 300th career win.

Dylan Addae-Wusu scored 20 points on 7-for-13 shooting and Aaron Wheeler added 15 off the bench as St. John’s shot 36.8 percent in the second half and 41.1 percent overall. Leading scorer Julian Champagnie never got into a rhythm, finishing with 11 on 5 of 19 attempts from the floor after scoring a career-best 34 against DePaul.

TyTy Washington Jr. made his first career start at point guard and dealt a program-record 17 assists as the Wildcats overpowered the Bulldogs in Lexington.

Oscar Tshiebwe had a double-double by halftime and finished with 29 points and 17 rebounds as Kentucky (12-3, 2-1 SEC) rebounded from a Tuesday loss at No. 21 LSU. Washington added 17 points.

Tari Eason had 24 points and 12 rebounds as the Tigers defeated the Volunteers in Baton Rouge, La.

Collin Gillespie scored a season-high 28 points and the Wildcats rallied from a five-point halftime deficit to defeat the host Blue Demons in Chicago.

Justin Moore added 21 and Caleb Daniels had 11 for the Wildcats, who won their fourth in a row. It was Villanova’s 21st straight win over DePaul dating to 2008.

Javon Freeman-Liberty led DePaul with a career-high 34 points while David Jones added 12. Brandon Johnson grabbed 10 rebounds. The Blue Demons have dropped four straight since a 9-1 start, with each of those losses coming in conference games.

Matt Bradley scored a season-best 26 points and the host Aztecs knocked the Rams from the ranks of the unbeaten with a convincing victory in Mountain West play.

Kadary Richmond scored a career-high 27 points, including a go-ahead shot in the lane with 31 seconds left in overtime, as the Pirates outlasted the Huskies in a Big East game in Newark, N.J.

Bryce Aiken had 22 points and seven assists and made two clinching free throws for Seton Hall (11-3, 2-2 Big East) with one second left.

UConn (10-4, 1-2) had a chance to take the lead after the basket by Richmond, but Jared Rhoden came up with a steal and called a timeout. Rhoden, who scored 15 points, briefly had been benched by Seton Hall coach Kevin Willard earlier in the game for not challenging a 3-point attempt.