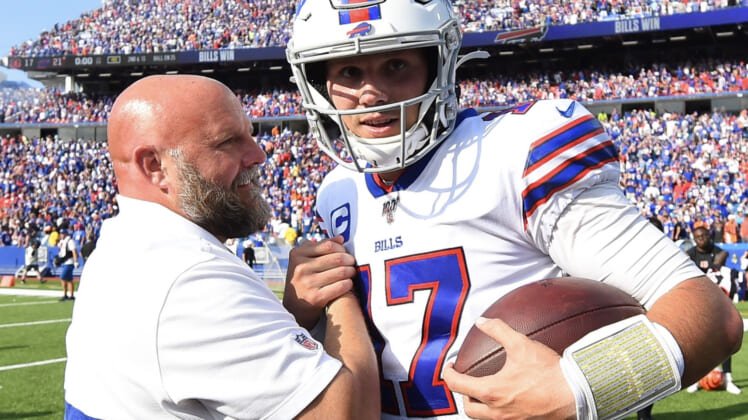 Heading into the quarter point of the season for most teams, the obvious names sit atop this list. Patrick Mahomes is still at a record-breaking pace. Tom Brady has the defending champs looking like a real juggernaut.

It’s in this that we give you our top-10 quarterbacks heading into Week 4 of the NFL season.

Mahomes put up a mere 374 yards and three touchdowns in last week’s win over the Baltimore Ravens. This actually brought his season averages down. That goes to show us just how dominant the reigning NFL MVP is. The third-year quarterback is now on pace to throw for 6,373 yards with 53 touchdowns and zero interceptions. This week’s road outing in Detroit promises to be pretty difficult, but we’re darn sure Mahomes will be more than up for the task.

It’s getting downright comical at this point. New England took out the New York Jets by the score of 30-14 last week, and didn’t even cover the spread. It has now put up 106 points compared to 17 through three games. Brady? Well, all he’s done during this span is average over 300 yards with seven touchdowns and zero interceptions. Brady has now accounted for 132 touchdowns compared to 28 interceptions while boasting a 50-13 record since the start of the 2015 season.

We did see some regression from Prescott last week against a league-worst Miami Dolphins defense. He completed less tan 60% of his passes after connecting on over 83% of his passes in Dallas’ first two games. Even then, he’s doing some amazing stuff thus far this season. That includes completing a league-high 74.5% of his passes and leads all NFL quarterbacks with a 9.6% touchdown rate. Talk about an elite-level early-season performance from Prescott. It’s now going to get more difficult with the Saints on the slate in New Orleans this week.

It’s pretty shocking to realize what we’ve seen from the Seahawks thus far this season. They could easily be 0-3 after dropping last Sunday’s home game against the New Orleans Saints. Even then, it’s Wilson who has kept this team afloat. He completed 32-of-50 passes for 406 yards without an interception against the Saints. Overall, Wilson has thrown a total of seven interceptions in his past 532 attempts dating back to Week 1 of last season. He’s simply getting better. We just don’t know if it will be enough in a vastly improved NFL moving forward.

This second-year quarterback was unable to complete a comeback against Patrick Mahomes and the Chiefs last week. In no way does this mean Jackson wasn’t up for the task. He tallied 313 total yards and avoided throwing an interception for the third consecutive game to open up his sophomore season. Now, heading into Week 4, Jackson has accounted for 1,035 total yards and eight touchdowns without an interception. He’s squarely in the MVP conversation as Baltimore wraps up the first quarter of its season.

Watson finally saw pass protection hold up in front of him during last week’s win over the Los Angeles Chargers. He responded by completing 25-of-34 passes for 351 yards with three touchdowns in a flawless effort. It sure does seem like the third-year quarterback has taken that next step. Watson has now accounted for 5,557 total yards with 39 total touchdowns and 10 interceptions over his past 19 starts. They might not be Patrick Mahomes numbers, but they’re pretty darn awesome.

We’re waiting for Rodgers to explode in Matt LaFleur’s offense. It just has not come to fruition through three games, and it is a bit eye-opening. Rodgers heads into Week 4 ranked 23rd in passing yards and tied for 17th with just four touchdown passes. Meanwhile, the Packers rank 23rd in scoring and 27th in passing offense. The one saving grace here is that Rodgers has yet to throw a pick and has only two interceptions in 690 pass attempts dating back to the start of last season. Can he get it rolling Thursday night against the Eagles?

Last week’s two-interception performance was troubling on the surface. It was part of a 49ers offense that turned the ball over a whopping five times in a narrow win over the Steelers, only to be bailed out by the defense. However, both picks were off the hands of receivers. Garoppolo also led two touchdown-scoring drives in the second half, including the game-winning touchdown pass to Dante Pettis. Since joining the 49ers in 2017, Garoppolo has posted a 9-2 record as a starter. All other San Francisco quarterbacks are 4-20 during that span. He has this team undefeated. It warrants a spot in the top 10.

Right up there with Lamar Jackson and Dak Prescott as the most improved quarterbacks from a season ago, Allen has his Bills at 3-0 heading into Sunday’s matchup with another undefeated squad in that of the New England Patriots. He’s accounted for 855 total yards with five touchdowns and three interceptions while leading an offense that ranks in the middle of the pack in scoring after finishing last season No. 30. We’re highly intrigued to see how much more Allen progresses and whether he can go tit-for-tat with Tom Brady. But for now, he’s a top-10 quarterback.

It really doesn’t seem like Indy has taken a major step back on offfense following Andrew Luck’s retirement. Through three games, Brissett is completing 72% of his passes for 646 yards with seven touchdowns and one interception. He ranks sixth among regular starters with a 112.0 passer rating and is leading the league’s 12th-ranked scoring offense. Sure there’s been some regression from Luck’s overall performance last season, but that’s to be expected. Brissett is not as talented as his counterpart. But he’s doing everything possible to make the Colts legit playoff contenders.