Top 10 matchups for Week 1 of the NFL season

Week 1 of the NFL season always offers a plethora of intrigue and tremendous matchups across the board.

It’s the start of a new season — one that gives each of the league’s 32 teams the hope of earning a playoff spot. Getting off to a good start definitely bodes well here.

From two studly young NFC South players lining up against one another to New York Giants corner Janoris Jenkins looking to contain Dez Bryant, here are your top-10 individual matchups for Week 1.

Trufant allowed a sub 70 quarterback rating when targeted last season. It’s in this that he proved himself to be among the best all-around corners in the game.

On the other hand, Evans proved himself as Jameis Winston’s top receiving option for a surprisingly good Tampa Bay Buccaneers offense. All said, Evans recorded 74 receptions for 1,246 yards.

Unfortunately for Tampa Bay, the success rate Winston had when targeting Evans wasn’t necessarily there. He caught exactly 50 percent of the passes thrown in his direction.

In what could be a telling early-season NFC South outing, the Atlanta Falcons seem to have the upper hand when it comes to this one matchup.

In fact, Trufant held Evans to eight catches for 109 yards in two games last season. Should that continue here, the Falcons will likely start the season with a win.

Is Foster the same player we saw dominate the league as a member of the Houston Texans? Well, we will surely find out here soon.

The Miami Dolphins’ new starter will have the difficult task of taking on a Seahawks run defense that ranked first in the NFL a season ago.

Seattle’s run defense was so darn good that it held DeAngelo Williams, Adrian Peterson and Todd Gurley to an average of 45 yards per game. Think about that for a second.

For his part, Foster has proven himself to be among the most productive running backs of his generation. He’s averaging 115 total yards and nearly a score per game during his career.

It’s now all about staying healthy and proving himself in South Beach. Should that happen in Week 1, the Dolphins might be able to pull off an upset of epic proportions to start the season. 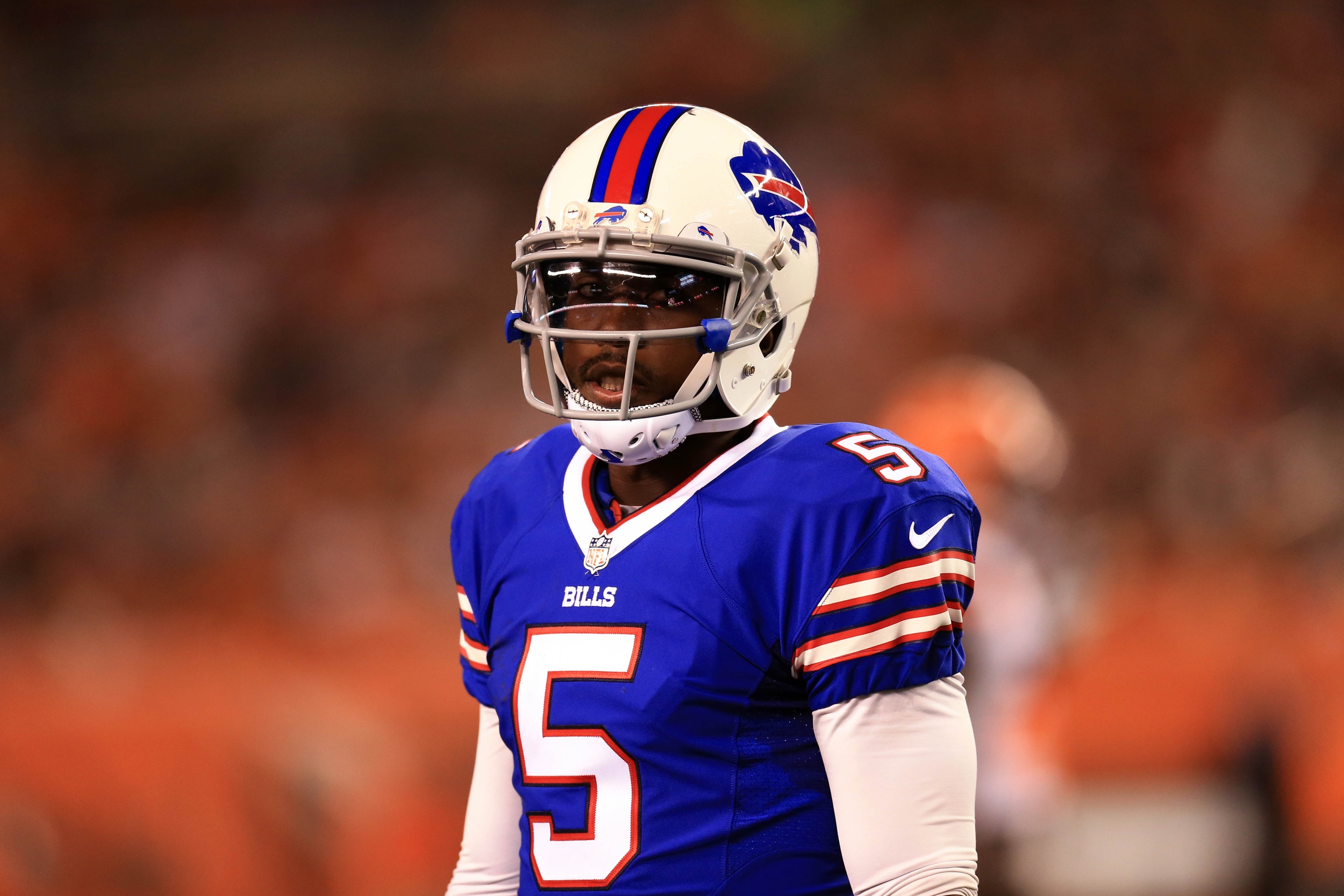 Taylor never got a chance to see the field as a member of the Baltimore Ravens. All said, the current Buffalo Bills’ starter threw a grand total of 35 regular season passes in four seasons with the Ravens.

Now, coming off a stellar first season in Western New York, the newly extended Taylor will be looking to make his former team pay.

It really is a huge early-season game for two squads that were merely mediocre last season. For Buffalo and Taylor, a victory against the Ravens would be a great way to start the season.

After all, here’s a team that has not earned a playoff spit since the Bill Clinton Administration. Should that continue, head coach Rex Ryan will likely be without a job at the end of the season. Getting off to a solid start would help matters big time here.

This is definitely a tough task for Peterson. While the Arizona Cardinals’ top defensive player prides himself on locking up the best opposing receivers every week, players of Edelman’s ilk can give him fits.

This is to say that Peterson tends to struggle with smaller, quicker receivers more so than those prototypical No. 1 pass-catcher types.

For the Patriots, it’s all going to be about third-year quarterback Jimmy Garoppolo finding a rhythm with the team’s top pass catchers. That’s going to be extra difficult with Tyrann Mathieu and Co. prepared to defend against Rob Gronkowski between the hashes.

Short of Garoppolo finding some sort of success targeting Peterson on the outside, New England’s offense could be in for a long night. 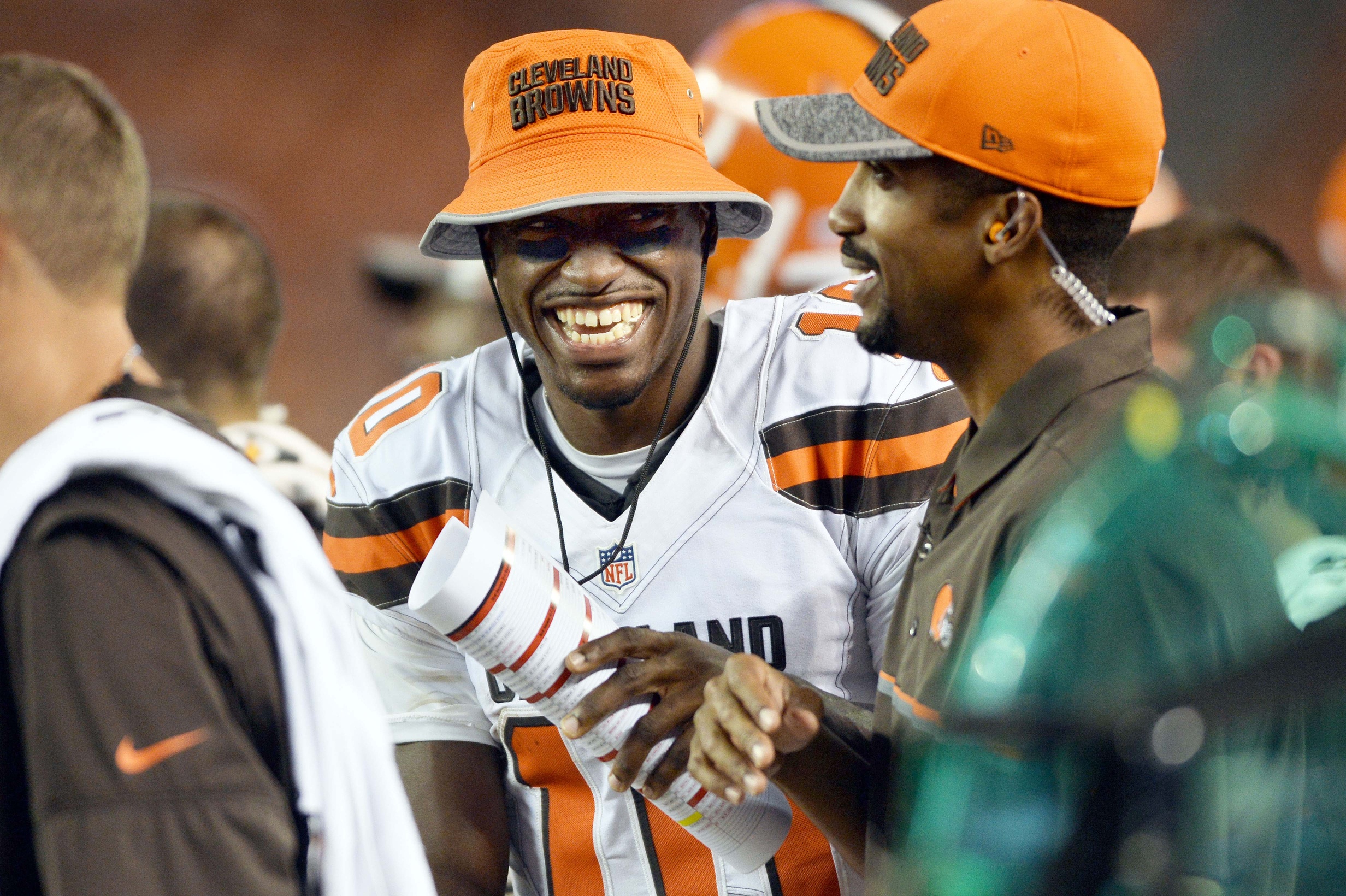 Leave it to the NFL schedule-makers to pit Griffin III against a former division rival when he was a member of the Washington Redskins.

In five career starts against the Eagles, Griffin III has posted a 3-2 record with 10 total touchdowns and just five interceptions. Those three wins and 10 scores are the most he’s compiled against any one team.

Cleveland isn’t expecting to contend for a playoff spot this season. Instead, it’s all about finding success with the youngsters it has on offense. At just 26 years old, Griffin III is still surprisingly one of those youngsters. He’s also playing a position that hasn’t had much success in Cleveland since the franchise reentered the league.

While a ton has changed in the NFC East since Griffin III was last a prevalent quarterback in that division, he might be aided by some sort of familiarity here. That’s going to be the biggest key heading into Week 1.

Can Griffin III and the Browns get off to a strong start to the Hue Jackson era?

Davis was among the best right tackles in the NFL before he decided to temporarily retire. Now back in the fold with the San Francisco 49ers after a one-year hiatus, Davis has been pushed inside.

He has the frame (6-foot-5 and 323 pounds) to play inside. He also boasts the natural athleticism and brute strength to succeed at guard.

Though, Davis will have the monumental task of taking on a player in Donald, who is among the best at his position.

When it comes to Chip Kelly’s spread offense, timing can be interrupted big time if pressure is presented from the interior of the line. That’s where Donald comes into play as one of the best interior pass rushers in the game.

While the Rams-49ers rivalry might not have the same luster as we saw a quarter century ago, this promises to be a pretty dynamic game of trench warfare. True football fans will appreciate that.

The newest Oakland Raiders corner is going to have an awesome first test as the team’s shut-down guy. Smith will be tasked with taking on a New Orleans Saints receiver that broke out big time a season ago.

He will be doing so hoping to help the Raiders get off to a strong start in a season in which they have playoff expectations.

Cooks caught 65 percent of the 129 passes thrown in his direction last season. Meanwhile, Smith, then with the Kansas City Chiefs, allowed a sub 55-percent catch rate. Something is definitely going to have to give here.

Should Drew Brees (about to potentially become even richer with a new contract) have success targeting his top receiver, it might very well counteract the success Oakland’s offense promises to have come Sunday. After all, Derek Carr and Co. is taking on the league’s worst-ranked defense from a season ago.

In reality, New Orleans’ best hope here is a shootout. Should that end up coming to fruition, Cooks will have to play a huge role.

Back at his more natural EDGE rushing position, the Green Bay Packers are asking Matthews to dominate from a pass-rush standpoint. When he’s played outside linebacker in the past, Matthews has done just that.

The former first-round pick racked up double-digit sacks in four of his first six seasons before moving inside last year.

Green Bay’s secondary is about as talented as any in the NFL. If it’s able to get a solid pass rush, that could make the team’s defense one of the tops in the league as well. Unfortunately, this is something that’s been lacking in the past.

Taking on a high-powered Jacksonville Jaguars offense, it’s going to be important for that pass rush to show up early and often. Should that not happen, Blake Bortles will have a field day throwing to his duo of 1,000-yard receivers.

To be clear here, Remmers was absolutely dominated by Miller in Super Bowl 50. The game’s eventual MVP led the Denver Broncos with three sacks, two of them coming against the Carolina Panthers starting right tackle.

In order for Cam Newton to rebound from his disastrous performance in the Super Bowl, he must get better protection from his right tackle.

It’s all about scheme here. Denver’s going to make sure Miller is matched up against Remmers as much as possible. This will likely force the Panthers to send help in that direction.

Unfortunately, this will also give the likes of DeMarcus Ware, Shane Ray and Shaq Barrett one-on-one opportunities elsewhere on the field.

This is what Denver has banked on in the past. It’s also the primary reason Denver hoisted the Lombardi last season. If we see much of the same from Wade Phillips’ defense to start the 2016 campaign, it will definitely bode well for the quarterback-starved reigning champs.

Talk about throwing your new high-priced corner into the fire immediately. It matters not that Dak Prescott will get the call as the Dallas Cowboys’ starting quarterback with Tony Romo injured. In fact, that likely means that Bryant will see even more targets.

Despite signing a whopper of a deal in the spring, there are still some major question marks surrounding Jenkins. He was consistently beat over the top when not given safety help.

It’s one of the reasons many pundits took issue with the deal the New York Giants gave him.

In order for the Giants to get back on top in the NFC East, they’re simply going to need a better performance from the defense. That starts at linebacker and on the outside in coverage. If this doesn’t happen, it matters little how good the team’s offense is.

Week 1 represents a solid opportunity for Jenkins. He might be going up against a top-five receiver, but the Giants are also taking on a rookie mid-round pick in Prescott who will be making his first start under center.