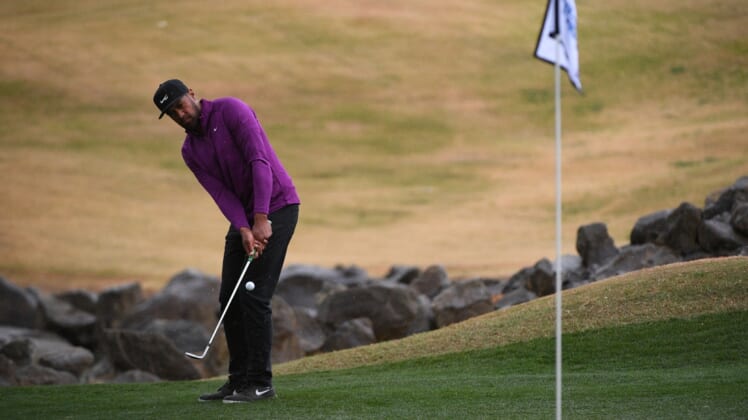 Tony Finau overcame a double bogey to shoot a 5-under-par 67 on Saturday and grab a share of the 54-hole lead at The American Express in La Quinta, Calif.

He will begin the final round tied at 15 under for the tournament along with Max Homa and South Korea’s Si Woo Kim as Finau seeks his first PGA Tour victory since the Puerto Rico Open in 2016.

Homa shot a 7-under 65 that vaulted him nine spots up the leaderboard. He will play in the final group on Sunday with Kim, who shot a third-round 67.

Finau will be paired with Richy Werenski, who is in solo fourth place at 14 under.

Russell Knox shot the low round of the day, vaulting 32 spots with his 8-under 64 that put the Scotsman in a tie for fifth place along with Brian Harman and Argentina’s Emiliano Grillo.

At No. 22 in the official world golf rankings, Finau is the highest-ranked player on the first page of the leaderboard. He’ll begin Sunday as the favorite, but must overcome a history of Sunday struggles.

Finau has finished second seven times and third three times over the past four years, but has been unable to break through for his first PGA Tour on mainland U.S. That includes losing in a playoff to Webb Simpson at last year’s Waste Management Phoenix Open after shooting a final-round 70.

It appeared the pressure may be getting to Finau again when he inexplicably missed the par-3 13th hole, putting his tee shot in the water and taking a double bogey. However, he recovered to reel off three consecutive birdies to move into a share of the lead with Homa and Kim, who finished their rounds ahead of Finau.

Homa suffered his own double bogey after finding the water with his tee shot on the par-4 seventh hole. He also quickly recovered, birdying the next hole and going 5 under over his final 11 holes.

Kim had a far less adventurous round, posting five birdies on his bogey-free card.

Homa will also be seeking his second career PGA Tour title on Sunday, having previously won the Wells Fargo Championship in 2019. He had four top 10 finishes against nine missed cuts in 23 events last year, and is making his 2021 debut.

Patrick Cantlay, the highest-ranked player in the field at No. 10, shot up 43 places to a tie for 13th with a 65 on Saturday after making the cut on the number. He was within three of the lead before bogeying the par-5 eighth, his 17th hole of the day, falling to 11 under for the tournament.

He still worked his way past second-round leader Sungjae Im, who struggled to a 1-over 73 on Saturday. The South Korean made two costly errors, the first being an aggressive line with his second shot on the par-5 fifth hole that found the water, leading to a bogey.

Im found the water again with his tee shot on the par-4 ninth hole. He compounded the issue by going for the green from a tough lie with his third shot, again finding the water and eventually carding a triple bogey.

Sunday’s forecast for La Quinta calls for high temperatures around 60 degrees with the potential for winds to pick up more than they have through the first three rounds.

NOTES: Defending champion Andrew Landry shot a 74 on Saturday to fall to 3 under, tied for last among the 62 players who made the cut. … Brandon Hagy, who got into the tournament on Monday when Jon Rahm withdrew and held the lead after the first round, is tied for 20th at 10 under after shooting 71 on Saturday. … After playing one round each at the Stadium and Nicklaus Tournament Courses at PGA West, the players who reached the weekend play the final 36 holes on the Stadium Course.