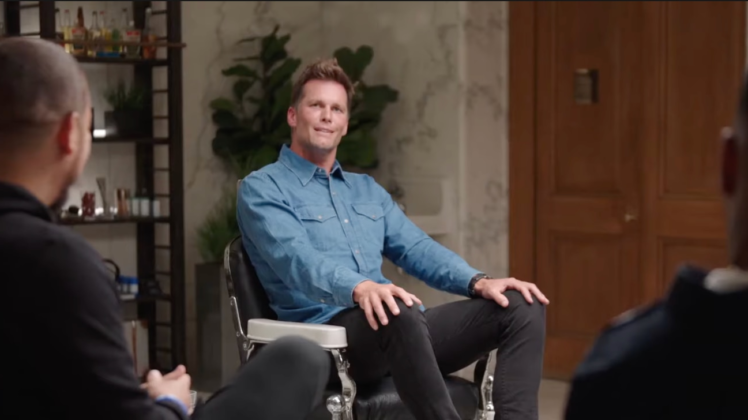 Season after season, the debate on the stability of Derek Carr’s role as franchise quarterback with the Las Vegas Raiders reaches a fevered pitch when Raiders fans have nothing better to talk about. This “dead period” Derek Carr faux controversy is swirling around the Tom Brady The Shop appearance on HBO. But, like last season, it’s much ado about nothing.

Do I dismiss Brady’s comments could be about the Raiders? No, I don’t. Lots of people are spending hours dissecting it like it’s the Zapruder film and they’re looking for Gruden and Carr on the grassy knoll.

Suppose you missed the Tom Brady The Shop hubbub, lucky you. For fans who live their lives in pursuit of insulting and railing against Derek Carr, it was the gasoline they needed to start their bonfire until training camp rolls around July 27.

With no Raiders news to speak of, sans the coming out of Carl Nassib last week, the Tom Bady The Shop comments – fueled by some media reports indicating he was talking about the Raiders – have given rise to the seasonal Derek Carr obsession.

Sunday the Carr detractors, always looking for a way to stick it to those Carr “stans,” were given several huge logs to toss on the fire when Pro Football Talk‘s Mike Florio posted several league sources had indicated to him the team Tom Brady was speaking of was the Las Vegas Raiders.

“One of the teams, they weren’t interested at the very end. I was thinking, ‘you’re sticking with that mother*cker,” Brady said on the television show. “When I look back I’m like, there’s no fu*king way I would’ve went to that team. But they said they didn’t want me. I know what that means, I know what that feels like. And I’m gonna go fu*k you up because of that.”

Now, I know Raiders fans don’t like Florio and many of them have told me he’s always trolling Raider Nation. But I don’t know the man, so I’m not going to pass judgment on his work or sources. Yet, does it really matter much what the Tom Brady The Shop comments mean or who he talked about? As the greatest quarterback (sorry, the guy is) to ever play the game, he’s got swagger and if a team treated him one way and he didn’t like it, he’s going to bitch about it. Which apparently he felt compelled to do.

Whether it was (and there’s no way to be sure unless Brady tells us, which clearly isn’t something he will do) or wasn’t, does it really matter for the Raiders or their future? I say it doesn’t. In the end, Brady said he still wouldn’t have signed with the unnamed team even if the money had been right.

What the narrative being pushed now does do is further undermine both Jon Gruden and Derek Carr by design. Everyone knows Jon Gruden is the final decision maker when it comes to Raiders personnel moves and they know who the “mother*cker” Brady was speaking of if it was the Raiders – Derek Carr.

Florio, and many other members of the media, have been clear they believe Derek Carr isn’t an elite franchise quarterback. But, lots of fans believe it too. So this gives them even more opportunity to talk about how Carr can’t get it done and that he’s not the answer for the Raiders.

That’s why the Tom Brady The Shop comments are being played up. Not because anyone actually knows who he is talking about. The Tom Brady The Shop expletive-laced missive has become the latest convenient crutch for Carr haters to get on the soapbox at a time when NFL news is slow.

I also have many discussions with knowledgeable, loyal, long-time Raiders fans who are not fans of Derek Carr the football player. They make valid and measured points about his limitations as an NFL quarterback. Those aren’t the types of fans I’m speaking of when we talk about this obsessed bunch.

To be clear: do I think Derek Carr is the best quarterback in the NFL? No. Do I think he’s as bad as some of his detractors claim he is? No. Do I think an NFL team owes it to itself always to explore getting better at every position? I do. Yet this constant obsession with Derek Carr is old, tired and played out in my book. His coach and GM support him and he can win with the Raiders if he’s got everything needed to do so. But those who don’t like Carr or believe in him won’t accept that. They show it time and time again each offseason.

That’s what this whole Tom Brady The Shop nothing burger is all about. Do I dismiss Brady’s comments could be about the Raiders? No, I don’t. Lots of people are spending hours dissecting it like it’s the Zapruder film and they’re looking for Gruden and Carr on the grassy knoll. They’re looking for anything to, once again, disparage the QB they don’t like.

Tom Brady makes news with almost everything he says. Yet, he’s also a master of driving and controlling his own brand. He knew the comments would generate a ton of interest in telling the story. He doesn’t do anything on the fly. He’s also smart enough to know, despite his lofty position in the pantheon of professional football, you don’t burn bridges. He’s more careful than that.

So, for those who want to believe it was the Raiders that Tom Brady slammed in the television appearance, knock yourself out.

I chalk it up to a slow news week and the continued march against Derek Carr as the starting QB of the Raiders. The Raider Nation civil war between the Carr supporters and Carr detractors rages on for yet another offseason.