Tom Brady, embroiled in a standoff with NFL commissioner Roger Goodell, has received overwhelming support from his peers regarding the entire Deflategate scandal. After the latest numbers were released regarding NFL player sales rankings, it appears the general public has followed suit.

George Atallah, Assistant Executive Director of External Affairs at the NFLPA, shared this information via the NFLPA website.

Not surprisingly, quarterbacks dominated the top of this list. 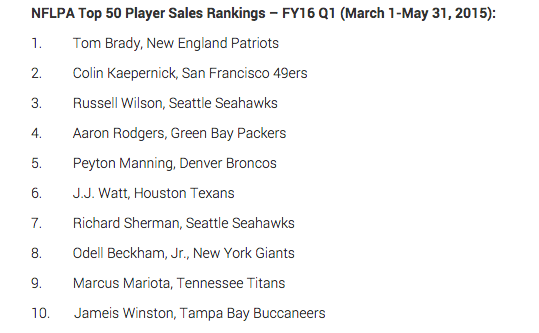 The NFL is unabashedly a passing league these days, and quarterbacks have always been among the most popular players—dating back to the days of Bart Starr and Joe Namath.

Interestingly, Colin Kaepernick stole the show when it came to Nike jersey sales, with Brady coming in second, per the NFLPA report. Where Brady made the biggest impact was from “Oyo Sports mini-figures, Forever Collectibles bobbleheads (followed by teammate Gronkowski), Fatheads and Lids custom player headwear.”

Nobody should be surprised Gronk bobbleheads were hot. The personable tight end has been touring the nation since the New England Patriots won the Super Bowl in February, making copious headlines along the way.

It’s also not surprising that J.J. Watt and Richard Sherman were the hottest-selling defenders. Both men possess larger-than-life personalities and have developed an amazing fan base because of their exploits both on and off the field.

Obviously, sales are surging because everyone is eager for the season to begin. With preseason games just weeks away, it’s almost time for NFL football.